21.6.2007: 2302 LT: Posn 04:15N – 05:35E, Pennington, Nigeria.
A tanker undergoing cargo operations at a SBM was attacked by armed pirates. The pirates boarded the standby tug at the stern of the vessel and contacted the ship via VHF demanding to be let on board or they would sink the ship. The crew mustered, cargo operations were stopped and the vessel disconnected from the SBM. The tug was cast off and the ship proceeded at full speed to sea. All attempts to contact the authorities and the Nigerian navy were futile.

25.06.2007: 1820 LT: Posn 01:51.5S – 105:02.8E Dep Tanjung Ular Port, Palembang, Indonesia.
Around eleven pirates, armed with long knives and shotguns boarded a tanker underway. On sighting the pirates, crew ran inside the accommodation and closed all doors. On taking the head count master realised one oiler was being held hostage. Master contacted the shore authorities. The pirates opened fire but there were no injuries to crew. The pirates escaped in a small speedboat. Coast guard arrived to investigate. No stores missing.

23.06.2007: 2145 LT: Pulau Lima, Kota Tinggi, Malaysia.
Six robbers armed with long knives and pistols boarded a product tanker while she was alongside. One of the crew was hit on the head with the machete. Another crewmember stood up to the robbers. In the struggle, he fell overboard but managed to swim to the shore and contacted the police with assistance from the local fishermen. The robbers spent around 30 minutes ransacking and robbing the crews’ personal effects, before escaping. The injured crews were sent to the hospital

Check out the "Live Piracy Map" here (clicking the map makes it larger). Remember that the ICC reporting includes most attacks on ships and crews, regardless of where they occur, and include simple sneaking aboard to steal small items, as well as true pirate attacks on the high seas: 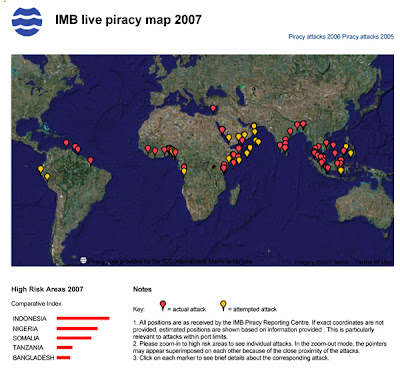