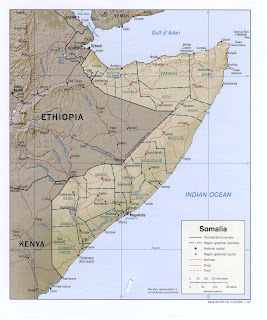 As set out here and here:

The ITF is supporting moves to address incidences of piracy and armed robbery that have plagued vessels sailing off the coast of Somalia.

The ITF has lent its full backing to a proposal to take the issue of piracy and armed robbery close to the Somali coast to the UN Security Council. The proposal, made by the IMO Secretary-General, was endorsed by the Council of the International Maritime Organization (IMO), which met for its 98th session from 25 - 29 June in London, UK. It is hoped that this will lead to a request to the Transitional Federal Government of Somalia to take action to prevent piracy and armed robbery. This includes allowing ships to enter its territorial waters when they are attempting to deal with acts of piracy or armed robbery, which are putting the safety of crewmembers at risk. The proposal particularly refers to vessels bringing humanitarian aid to Somalia.

Renewed attacks on ships - including those carrying humanitarian aid through the World Food Programme - have been prompted by recent instability in Somalia, with a rising number of reported incidents.

Jon Whitlow, ITF Seafarers’ Section Secretary, commented: “The ITF welcomes the IMO’s initiative and we supported it at the IMO Council. It is to be hoped that urgent action will result and that seafarers will no longer subject to such attacks and held hostage against the payment of a ransom.”

Militating against such a move might be some clan issues as well as money matters. Karsten von Hoesslin who runs the site Maritime Security News Update (soonto be moving- wait for an update) has been playing with Google Earth and found another possible "pirate base" on the Somali coast (and please take this for what it is- supposition), with the note that the community just above looks a "little fancy." Judge for yourselves (click on the image to make it larger): 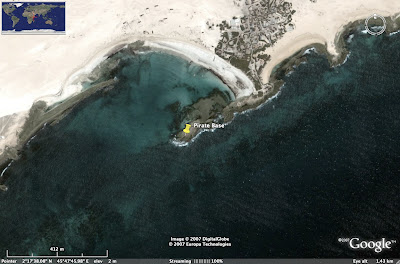 A useful discussion of the Danica White capture can be found at Protocol Security under the title "The highjacking of the Danish Ship Danica White off the coast of Somalia" and in the free pdf download of excerpts of their newsletter Strategic Insights No. 8.
Posted by Mark Tempest at 7/09/2007 11:13:00 AM