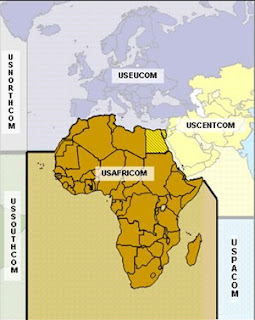 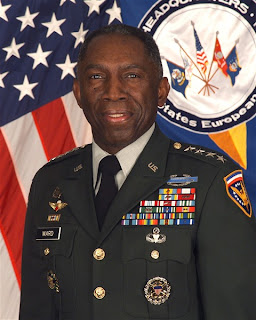 As reported here, AFRICOM has its first commander:

Ward has served as deputy commander of U.S. European Command in Stuttgart, Germany, since May 2006. In that role, he has been responsible for the day-to-day activities for U.S. forces operating across 92 countries in Europe, Africa, Russia, parts of Asia and the Middle East, the Mediterranean and most of the Atlantic Ocean.

If confirmed to his new post, Ward will help bring AFRICOM to initial operational capacity as a command subordinate to EUCOM by October. AFRICOM is slated to be established as a separate unified command by Sept. 30, 2008.

The above graphic shows AFRICOM's proposed area of responsibility at full operational capability. In October 2007, U.S. Africa Command (AFRICOM) is slated to be structured as a sub-unified command to U.S. European Command. It is expected to be a fully unified command able to handle all responsibilities about a year later. AFRICOM will eventually have responsibility for the entire continent of Africa, except Egypt and the surrounding islands.