Maritime Security: All cargo containers that enter US to be scanned 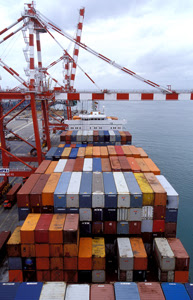 Found as All cargo containers that enter US to be scanned:

Virtually all cargo containers entering US ports will be scanned by radiation detecting equipment by the end of the year, Homeland Security Secretary Michael Chertoff said on Friday. However, more advanced equipment is needed to help speed the process and spot a potential nuclear device or dirty bomb, he said during a visit to the twin ports of Los Angeles and Long Beach.

The agency also expects to scan 'virtually 100 per cent' of all containers that enter through border points, he said. 'Countering the threat of nuclear terrorism and weapons of mass destruction is really the most important priority,' Mr Chertoff said. 'We need to make the investments now to be able to counter the threat as time passes.' It was his third visit to the giant port complex, the gateway for more than 40 per cent of all cargo container traffic entering the United States. A system is already in place at the giant complex to scan all of its incoming cargo, officials said.

Mr Chertoff said that his agency has been adding radiation portal monitors at major seaports and facilities and now has more than 1,000 of the devices in use. Trucks carrying containers unloaded from ships pass through the detectors. If the machine find signs of radiation, the container gets another scan and possibly an inspection by hand-held devices to help identify how much and what kind of radiation is present.

Flanked by lawmakers and law enforcement authorities at a fire station at the Port of Los Angeles, Homeland Security Secretary Michael Chertoff on Friday unveiled a new strategy for the rapid resumption of trade after a terrorist attack at a major U.S. port.

As the U.S. Coast Guard gunboat Halibut idled a few yards offshore, Chertoff said the plan was "about making sure we spend as little time as possible paralyzed by an attack."

The plan aims to streamline the maze of jurisdictions through which commerce moves, devise a chain of command and return into service key terminals, bridges, roads, rail lines and pipelines. The aim is to quickly restore the flow of commodities and goods, such as crude oil, clothing, car parts and medical supplies if a terrorist attack were to occur at a major port.

Planning is good, so long as you remember that "no plan ever survived contact with the enemy" and build in some flexibility...
Posted by Mark Tempest at 7/23/2007 06:21:00 AM