World War II provides some exciting sagas of ships surviving or succumbing to torpedoes, suicide airplanes and ship to ship combat. But not much time is spent with ships who sailed into harm's way, fought in major battles and, somehow, remained unscathed. But such tales should be told - and one of them involves "The Unbeatable Ship", the light cruiser USS San Diego (CL-53):

The San Diego was a light cruiser-one of four of the Atlanta class-and the only one of her sisters to survive the war unscathed. Ships of this class could steam at over 30 knots and carried a main battery of 16 five-inch guns, which enabled them to provide formidable anti-aircraft defense for the fast carrier task forces that spearheaded the naval offensive in the Pacific.

A fortunate and well-run ship, always ready for action, the San Diego steamed over 300,000 nautical miles, engaged the enemy on 34 different occasions, and never lost a man. She earned 18 battle stars for her World War 11 service, more than any other Navy ship except for the famous carrier Enterprise.

In recognition of her battle record and her long, reliable and steady service-from the darkest days of the war to the final victory-Admiral Halsey designated the San Diego to be the first allied warship to enter Tokyo Bay at the war's end.

From her official history:

USS San Diego, a 6000-ton Atlanta class light cruiser, was built at Quincy, Massachusetts. Commissioned in January 1942, she passed through the Panama Canal en route to the Pacific in May and operated in the Hawaiian area with the carrier Hornet during June and July. In early August, San Diego's task force steamed to the south Pacific. Over the next six months, the cruiser provided anti-aircraft protection for U.S. aircraft carriers during the protracted and difficult campaign to hold Guadalcanal. She was present when USS Wasp was sunk by a Japanese submarine on 15 September and screened Hornet during the Battle of the Santa Cruz Islands on 26 October. In the complex three-day Naval Battle of Guadalcanal in mid-November 1942, San Diego operated with the carrier Enterprise.

San Diego continued in her aircraft carrier escort role as the war moved up the Solomon Islands chain in 1943. In November of that year, she covered USS Saratoga and USS Princeton as their planes hit the Japanese base at Rabaul, New Britain. She also accompanied Pacific Fleet carriers as they raided the Marshall Islands in early December.

During January-March 1944, San Diego participated in operations to seize bases in the Marshalls and reduce enemy facilities on Truk. Her combat role was briefly interrupted by west coast shipyard work, but she was back in the war zone in time to join in the assault on the Mariana Islands in June and July. During the Battle of the Philippine Sea in mid-June, she was part of a task force built around the carriers Essex, Langley and Cowpens. For the rest of the year San Diego accompanied the carriers as the war pushed into the western Pacific, leading to the capture of some of the Palau Islands in September and a beachhead on Leyte in October.

In 1945 San Diego took part in raids against targets around the South China Sea, in the Philippines and in the Japanese home islands. She also supported the invasions of Luzon in January 1945, Iwo Jima in February and the Ryukyus beginning in late March. Her five-inch guns bombarded the enemy ashore during the latter campaign. In late August 1945, after Japan's capitulation, San Diego steamed into Tokyo Bay as flagship of a task force that liberated Allied Prisoners of War. She returned to the United States in mid-September and afterwards helped to transport service personnel home in Operation "Magic Carpet". Decommissioned in November 1946, San Juan had no further active service. She was redesignated CLAA-53 in March 1949, stricken from the Navy list ten years later and sold for scrapping in February 1960.

More history here, along with the following ship identification page: 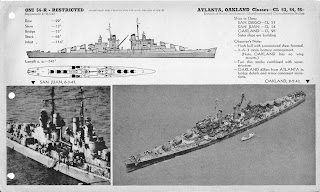 And it wasn't like she was operating in safe waters:

On 21 September, the Task Force struck at the Manila Bay area. After replenishing at Saipan and Ulithi, she sailed with Task Force 38 in its first strike against Okinawa. From 12 to 15 October, the carriers pounded the airfields of Formosa while San Diego's guns shot down 2 of 9 Japanese attackers in her sector and drove the others away; unfortunately, some enemy planes got through and damaged Houston (CL-81) and Canberra (CA-70). San Diego helped escort the two crippled cruisers out of danger to Ulithi. After rejoining the fast carrier force, she successfully rode out the typhoon of 17 and 18 December, despite heavy rolling of the ship. In January 1945, Task Force 38 entered the South China Sea for attacks against Formosa, Luzon, Indochina, and southern China. The force struck Okinawa before returning to Ulithi for replenishment.

San Diego next participated in carrier operations against the home islands of Japan, the first since the Dolittle/Hornet raid of 1942. The carrier force finished the month of February with strikes against Iwo Jima.

On 1 March, San Diego and other cruisers were detached from the carrier force to bombard Okino Daijo Island in support of the landings on Okinawa. After another visit to Ulithi, she joined in carrier strikes against Kyushu, again shooting down or driving away enemy planes attacking the carriers. On the night of 27 and 28 March, San Diego participated in the shelling of Minami Daito Jima; on 11 April, and again on 16 April, her guns shot down two attackers. She helped furnish antiaircraft protection for ships damaged by suicide attacks and escorted them to safety. After a stop at Ulithi, she continued as part of the carrier force supporting the invasion of Okinawa, until she entered an advanced base drydock at Guian, Samar Island, Philippines, for repairs and maintenance. 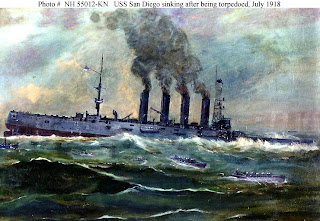 How different from her predecessor bearing the San Diego name, USS San Diego (AC-6) (formerly USS California) - the only major U.S. warship to be sunk during WW I:

In September 1914 California was renamed San Diego to make her original name available for assignment to a battleship. She frequently was employed as Pacific Fleet flagship between then and July 1917, when she was sent to the Atlantic for World War I service. San Diego operated as a convoy escort in the North Atlantic until 19 July 1918, when she was torpedoed and sunk off Fire Island, New York, by the German submarine U-156.

See also here and here for details on the older ship as a diving location plus an nice history.

And a very nice memorial 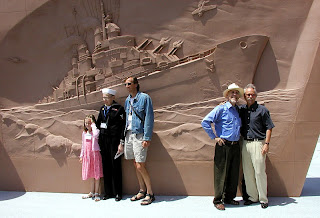 to "The Unbeatable Ship" in San Diego described here:

This monumental public artwork provides long overdue commemoration of the distinguished service of the cruiser USS San Diego and her crew, serving as a perpetual reminder of their selfless contribution to victory in World War II.

For which we offer this small salute. Great ships have great crews.