Where is M/V Infinity Marine 1? 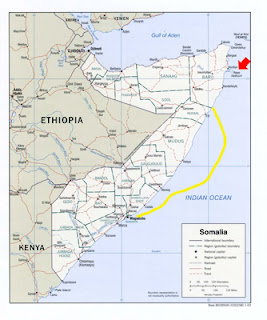 Gone missing and staying missing, as set out in Lost Ship Mystery:

A cargo ship with 21 UAE-based sailors on board has been missing for more than three weeks leading to fears for the crew's safety. Worried relatives of the men on board the MV Infinity Marine 1 are now bombarding the boat's owners in a desperate quest for information fearing the boat has sunk or been hijacked by pirates.

“The ship set sail on June 26, but it was diverted due to Cyclone Gonu that came through the Arabian Gulf,” Captain Khaldoon Kalla, of KK Marine Consultants, and the technical manager of the ship, told 7DAYS. “It safely sailed out of UAE waters, but there has been no news of it since it entered Somalian waters some time ago,” he added.
Despite intensive searches by the US and French navies there have been no sightings of the boat or its crew - made up of 15 Indians, five Pakistanis and one Iraqi. The pirate-infested waters off the Somali coast have seen numerous boats and sailors taken hostage in the past
few months.
“The ship may have found a shelter in Somalia but the waters there are controlled by pirates and so a hijack cannot be ruled out,” Kalla said. However, the fact that no ransom has yet been demanded for the boat or its crew means that nothing has yet been ruled out, he added.
Andrew Mwangura, from the Seafarers' Assistance Programme, said the ship disappeared some 37 nautical miles off the northeastern village of Ras Hafun in Somalia, adding that some debris had been found in the area where the cargo ship was last located.