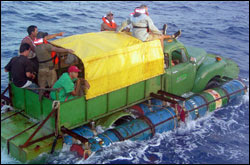 On U.S. Independence day, when homeland security was supposedly heightened following the London and Glasgow terrorist attacks, a group of migrants easily made it to south Florida undetected by the federal agency in charge of keeping America’s coasts safe.

The 49 Cubans slipped by the U.S. Coast Guard in the night and were discovered strolling down a Miami Beach street before U.S. Customs and Border Protection took them into custody around three in the morning. This unsettling breach of national security could have easily been committed by terrorists planning a deadly attack.
***
The Department of Homeland Security suffered a similarly embarrassing incident a few months ago when a large group of migrants slipped into the country during a huge drill involving hundreds of federal agents supposedly sharpening their border security skills off of the Florida coast.

With more than 300 government employees from 50 agencies covering the waters off of Miami, two boatloads of Cuban migrants just cruised by and made it to a South Florida beach. A Customs and Border Protection agent actually offered Judicial Watch an explanation; no boat was found and there is a strong possibility that the illegal aliens were dropped by vehicle and told to make it appear as if they had landed by boat.

Officials later confirmed, however, that those migrants were in fact from Cuba and, unless they came by aircraft, they had to use a boat since there is no road that connects the communist island to the United States.

These violations, during times of supposedly heightened homeland security, indicate that the government has work to in order to adequately protect the nation’s coasts.

Too much coast, too few watchers and an ambivalent policy toward refugees from Cuba.

In my view, the Coast Guard needs to be much bigger.

Balseros at Sea
Cuban refugees used an amazing variety of vessels in their attempts to reach Florida — in this case, in 2003, a boat with a propeller hooked up to the drive shaft of a 1951 Chevrolet truck. According to a study by the University of Florida, as many as 16,000 Cubans may have perished in the water between Cuba and Florida from 1959 through 1994.