Dissent on adoption of the Law of the Sea treaty 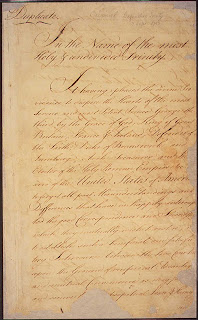 Some people think that adopting UNCLOS might cause the U.S. to lose some flexbility in anti-terrorism and other naval operations, as set out here:

Defense Secretary Gordon England maintain that the convention will enhance U.S. security. They argued in the Washington Times last month that to meet the "complex array of global and transnational security challenges," the United States must have "unimpeded maritime mobility -- the ability of our forces to respond any time, anywhere, if so required."

This is true, but ratifying the convention won't bring this benefit. Instead it would put America's naval counterterrorism efforts under the control of foreign judges. Suppose the United States seizes a vessel it suspects of shipping dual-use items that might be utilized to build weapons of mass destruction or other tools of terrorism. It's not a wild supposition. Under the Proliferation Security Initiative, the United States has since 2003 secured proliferation-related high-seas interdiction agreements with countries such as Belize and Panama, which provide registration for much international shipping. If the United States ratifies the Convention on the Law of the Sea, the legality of such seizures will, depending on the circumstances, be left to the decision of one of two international tribunals.
***
It's true that the convention exempts "military activities" from the tribunals' jurisdiction, but it does not define the term. The executive branch, worried about this ambiguity, has proposed a condition to ratification that would allow the United States to define the exemption for itself. But this condition amounts to a "reservation" disallowed by the treaty. International tribunals would still have the last word on the validity of the U.S. condition and the resulting scope of permissible U.S. naval actions.

Supporters note that many of the treaty's "freedom of the seas" provisions favor U.S. interests. But the United States already receives the benefits of these provisions because, as Negroponte and England acknowledged, they are "already widely accepted in practice." They maintain that ratifying the convention would nonetheless provide "welcome legal certainty." In recent years, however, the United States has not received much legal certainty from international tribunals dominated by non-American judges, and what it has received has not been very welcome. There is little reason to expect different results from these tribunals.

President Bush invokes a different rationale for ratifying the convention, arguing that it would "give the United States a seat at the table when the rights that are vital to our interests are debated and interpreted." What this really means is that American views of the law of the sea, even on issues related to national security, could be outvoted by a majority in an international forum. How can this make us safer?