The ship that won't go away

Local people celebrated as she was finally towed away from one of Britain's most precious stretches of coast.

But last night the container ship MSC Napoli was beached back on a sandbank off Devon after an underwater inspection revealed that she was too badly damaged to be moved any further.

The condition of the vessel, deliberately grounded in January after being damaged in storms, raises the prospect of her having to be cut up in situ, which would raise fears over pollution. 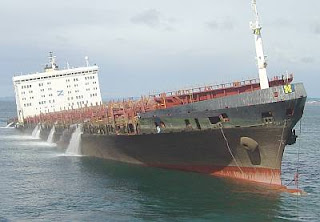 Napoli was refloated this week and moved 500m into deep water so that divers could inspect her thoroughly. It had been hoped she could then be taken clear of the coast, a Unesco world heritage site, and repaired or broken up in port.

But the inspection revealed a three-metre gash right across the bottom of the 62,000-tonne ship. A Maritime and Coastguard Agency spokesman said: "She is virtually in two halves and is being held together by her deck plates."

After the vessel was grounded, hundreds of people converged on Branscombe beach to scavenge the contents of about 50 containers that floated ashore. About 1,900 seabirds were affected after 200 tonnes of oil leaked from the vessel.

Temporary repairs were carried out to cracks in the sides of the vessel's hull while its cargo of more than 2,300 containers was removed.

MCA spokesman Toby Stone said the Napoli was drifting in the wind towards a new position about half a mile off shore steadied by two tugs.

Once it settles on the bottom as the tide ebbs, huge pumps will fill it with water to stabilise it. It will then be the responsibility of the owners, Zodiac Maritime, to dispose of the ship in consultation with the authorities.

Options include floating the bow off, lifting the stern section, or cutting the vessel up where it lies. The salvage operation has so far cost more than US$100 million.