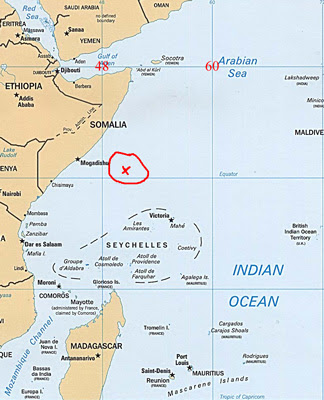 4. SOMALIA: The Transitional Federal Government of Somalia is planning to launch operations to prevent pirates from carrying out hijackings on vessels, per 8 Jun reporting. The Fishing and Marine Resources Minister, Hassan Abshir Farah, stated a decision was made to purchase speedboats that will deter piracy as well as prevent ships from illegally dumping waste into Somali waters. The Minister stated Government Marine Guards will be deployed along the coast of Central Somalia and Puntland (LM).
***
8. SOMALIA: Piracy resumes in international shipping lanes off the Central East Coast of Somalia as of 14 May 2007. As of 02 Jun, at least four vessels have been fired upon as far as 200 NM off the Somali coast within a 50 NM radius from the point centered on 01:37N 049:36E by gunmen in small white speedboats armed with machine guns and rocket propelled grenades. Given the distance from shore these recent attacks have occurred and poor weather conditions typical for this time of year, ONI assesses pirates are likely utilizing a larger merchant vessel as a mother-ship to support their small-boat attacks. If so, this would extend their attack range beyond 200 NM and increase the number of attack groups (typical 3 vessel configuration of one 9 meter center console support skiff and two 6 meter out-board-motor attack/boarding skiffs with 10 to 15 pirates per group) as well as increase their time on station. The International Maritime Bureau (IMB) has increased their recommended transit distance from 75 NM to 200 NM for vessels not calling on Somali ports. ONI further advises vessels stay at least 75 NM away from the position 01:37N 049:36E until the mother-ship threat can be evaluated. Vessels transiting the east coast of Somalia, regardless of distance from shore, should increase anti-piracy precautions and maintain a heightened state of vigilance. Vessels that have successfully prevented pirates from boarding are those that have taken evasive maneuvers that maximize the amount of wake turbulence with the minimum amount of momentum loss. Vessels with high freeboard and wide gunwale railings fare better than vessels with low freeboard and readily available hook-points for the makeshift 6 meter hook-ladders used by Somali pirates (IMB, ONI).
***
G. WEST AFRICA:
.
1. NIGERIA: Tanker (CAPE BRINDISI) boarded 22 Jun, in the morning, 20 miles off the
coast at Pennington offshore terminal. The vessel was boarded by at least three militants armed with AK-47 rifles. The attackers fired their weapons in the air and then began shooting at the vessel. The ship went into lockdown mode and the attackers are said to have left after some time without causing any injuries. The militants also commandeered a tug attending the tanker and apparently took control of the Pennington offshore terminal, where the vessel had been loading
(TW).
.
2. NIGERIA: Tanker boarded, robbed 16 Jun at 0140 local time, Lagos Anchorage.
Robbers boarded the vessel while it was undergoing preparations for STS operations. The robbers armed with knives tied up the aft station watchman. The D/O noticed a small wooden boat with ships mooring ropes and raised the general alarm. Upon hearing the alarm and seeing the forward mooring station crew coming aft, the robbers cut the mooring ropes and escaped with stolen stores. No injuries to crew. The port control was informed (IMB).
.
3. NIGERIA: Support vessel (SEACOR) attacked, hostages taken 2 Jun in the evening, while at anchor off Port Harcourt. Two Filipino employees of West Africa Offshore drilling were taken from the vessel by gunmen. The hostages were rescued four hours later on 3 Jun by the police of Elelenwo waterfront. One hostage taker was killed (LM).Guards will be deployed along the coast of Central Somalia and Puntland (LM).
***
2. GULF OF ADEN: Vessel reported suspicious approach 20 Jun at 1930 local time/1630
UTC, in position 13-30N:052-00E, eastern most Gulf of Aden, midway between Somalia and Yemen. When the vessel observed the unlit craft approaching from the starboard bow, the vessel altered its course to starboard to bring the suspicious craft to the port bow. As the vessel continued to alter its position, so did the suspicious craft leading the vessel to activate anti-piracy measures. At 1950 local time, the suspicious vessel remained three miles away from the port bow. At 2010 local time, the vessel continued to alter its course while continuing to be followed by the suspicious craft at a distance of three miles. At 2120 local time, the vessel altered its course again when they observed another unlit craft on the starboard bow, approximately 8.2 miles, with a course of 023 degrees and a speed of 2.2 kts. Another unlit craft was sighted on the port bow approximately 9.7 miles off, almost dead in the water. At 2130 local time, the vessel observed that the two new suspicious crafts were increasing their speed and approaching the vessel. At 2200 local time the first suspicious craft on the starboard bow was observed slowly altering its course and getting closer to the vessel, the two other suspicious crafts were also getting closer. The master reversed course but was continued to be followed for 10 minutes before the suspicious crafts aborted their approach (Operator, IMB).

Map of Western Indian Ocean represents area of concern for Somali pirate "mother ship" - sorta. Any reader with better access to a nautical chart of the area is invited to email me a more accurate map.
Posted by Mark Tempest at 7/02/2007 10:17:00 PM