Piracy: Another ship taken off Somlia? 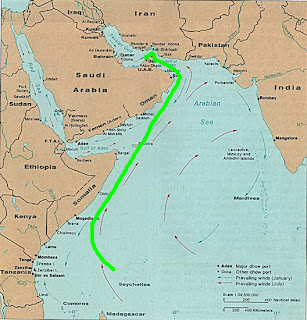 Another ship taken off Somlia?

A St. Vincent and Grenadines- flagged cargo ship has been missing for three weeks but rescue efforts are underway to locate the vessel, a Kenyan maritime official said on Thursday.

Mwangura said the ship owners have not located the vessel which had 12 crew members -- eight Tanzanians and four Indians -- onboard.

"The MV Reef Azania left Dubai 20 days ago and was to deliver cargo to Seychelles and then to Zanzibar but no one knows where the sailors are," he told Xinhua by telephone from Mombasa.

"We don't know where the vessel went missing but intense efforts were underway to establish the fate of the missing ship."

If it is confirmed that the MV Reef Azania was seized by Somali pirates, it would bring to five the number of foreign vessels held off the Horn of Africa nation in some of the most dangerous waters in the world.

Green line on the map is a possible route which would have taken the vessel into Somali pirate waters. Click on map to make it a little larger.
Posted by Mark Tempest at 7/19/2007 12:04:00 PM