Actually, the Navy historians have it wrong - it was the K-74 that was shot down. There's more to the tale, as set out here:

People who served in LTA rightfully boast of their aircraft's dependability. Airships assigned to fleet units were 87 percent available "on line" at all times. 35,6000 operational flights were made in the Atlantic and 20,300 in the Pacific, for a total of 5550,000 hours in the air escorting 89,000 ships loads with troops, equipment and supplies. Additional hours were flown by utility squadrons using K-ships and G-ships providing photographic calibration and torpedo recovery services.

LTA records reflect only one airship lost through enemy action. This loss was the night of 18 July 1943 when K-74 was advised that no enemy sub was in her assigned patrol area. However, K-74 detected a sub by radar and engaged it on the surface in the Caribbean. A gun duel briefly silenced the German fire, but the airship's bombs failed to release while over the U-boat, where upon she was brought down by the submarine's gunfire. K-74 floated for hours and all the crew but one were picked up the next day.

The one crewman who didn't return was Isadore Stessel, who has a web page devoted to his memory here:

Isadore Stessel, bombardier on a Navy Blimp K-74, died at sea near the Florida Keys on 1943 - his life the only one lost in a fight with a German submarine that shot the airship down.

The medals were presented at a ceremony as part of Armed Forces Day & National Heritage Preservation Day at the site of the former Richmond Naval Air Station in South Dade County. It was the base for blimps that patrolled the Florida coast during WW-II, looking for enemy submarines and escorting merchant ship convoys.

The purple heart was apparently mailed to Isadore's parents in 1944 but was never delivered. All the information the Stessel's received was a telegram reporting his death, plus the particularly terrible detail that he had survived the downing of the blimp only to be killed by a shark. His remains were not recovered. He was 28 years old, the son of Sam & Rose Stessel. 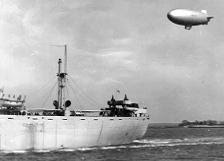 There were 11 men aboard the blimp, a 250 foot K-74 escorting a convoy of merchant ships past the Keys. Near midnight on July 18, they detected a submarine on the surface, following a tanker ship and a freighter. Not sure if the sub was friend or foe., they decided to fly in low over it. If it fired at them, they would know. A deck gunner on the sub opened fire. The blimp's machine gunner fired back. Stessel, a petty officer second class turned loose two depth charges, ashcan like bombs designed to shatter submerged submarines. The enemy sub escaped only to be sunk a few days later by the British. The K-74 damaged the sub's ballast tanks badly enough that the sub could not submerge, there were no survivors from the sub. The tanker and the freighter were unscathed. The blimp deflated and fell onto the ocean. All the crew but Stessel were rescued.

Painting of the action from that site. 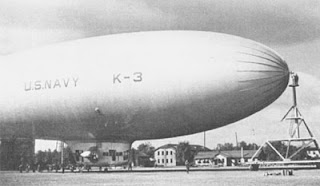 Some more on the "K-ships" here with some interesting photos. Wikipedia entry here. More here at the Naval Airship Association, from which the "escort" photo was liberated.