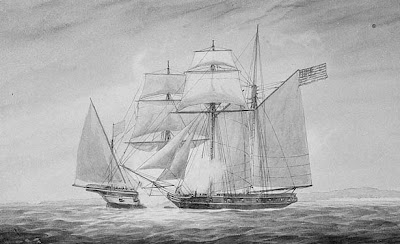 Time to honor the 206th Anniversary of the first American expedition to take on the Barbary pirates. On July 1, 1801, the first U.S. squadron of ships entered the Mediterranean to strike back at the Barbary Pirates who had been capturing American ships as set out here:

The Barbary States was a collective name given to a string of North African seaports stretching from Tangiers to Tripoli. These ports were under the nominal control of the Ottoman Empire, but their real rulers were sea rovers or corsairs who sallied forth from the coast cities to plunder Mediterranean shipping and capture slaves for labor or ransom. Among the famous prisoners ransomed from the shackles of Barbary were St. Vincent de Paul, and Miguel de Cervantes, author of Don Quixote (Castor, 1971).

Common piracy by the Barbary States blossomed into a sophisticated racket in 1662, when England revived the ancient custom of paying tribute. The corsairs agreed to spare English ships for an annual bribe paid in gold, jewels, arms, and supplies. The custom spread to all countries trading in the Mediterranean.

England paid tribute for the vessels of her American colonies, and France guaranteed it for them during the War of Independence. The new United States awoke abruptly to an ugly responsibility of independence when in 1785 the Dey of Algiers seized an American ship and jailed its crew for nonpayment of tribute (Channing, 1968).

The Dey was in no hurry to wring tribute from this new source of revenue. The capture of American ships would be more profitable, and in view of the naval weakness of the United States, a rather safe venture. Eleven of the first unfortunate Americans to fall into his hands died before their country ransomed the rest ten years later.

To the sea hawks of Barbary, the American ships in the Mediterranean were "fat ducks" prime for the plucking. In this view, they were encouraged by England and France whose trade was being hurt by the upstart Yankees (Castor, 1971). Turkey, overlord of Barbary, was an ally of Britain. The North Africans depended on free trade with France for supplies. Hence the pirates were forbidden to attack British shipping and in plain self-interest could not raid the French. With targets so limited, the American "fat ducks" were a godsend. By 1794, the Dey of Algiers had plundered eleven American ships and held one hundred and nineteen of their survivors for ransom.

President George Washington tried to reach an agreement with the Barbary States but with little success. His agents, one of whom was John Paul Jones, had diplomatic doors slammed in their faces.

In 1785, the exasperated Jefferson suggested that war was the only solution. His mind was "absolutely suspended between indignation and impotence." Jefferson declared that tribute was "money thrown away" and that the most convincing argument that these outlaws would understand was gunpowder and shot. The future president proposed a multi-national effort between European powers and America that would in effect economically blockade North Africa and ultimately provide for a multi-national military force to combat pirate terrorism. The European powers chose to continue paying tribute to the Barbary States (Irwin, 1970).

John Adams, the next President, went along with the Europeans and paid for peace in the Mediterranean. Congress, in 1795, authorized payment of tribute. Algiers was granted the equivalent of $642,500 in cash, munitions, and a 36-gun frigate, besides a yearly tribute of $21,600 worth of naval supplies. Ransom rates were officially set for those Americans already in Barbary prisons-$4,000 for each passenger, $1,400 for each cabin boy. Sunday after Sunday, a sad roll of names was read out in the churches of Salem, Newport, and Boston, listing the men in irons. Congress would only pay $200 for their freedom, the rest of the money had to be raised privately. Eventually, at long last, the American captives of the Dey of Algiers walked into the light, except for thirty-seven dead, whose ransoms had to be paid nevertheless (Malone, 1951).

Adam's acquiescence to Algiers prompted Tunis and Tripoli to demand and be promised their own blood money. Tripoli, especially, was piqued at the Dey of Algiers' good fortune.

The payment of blackmail did not end the indignities perpetrated by Barbary. An absurd episode in 1800 pointed up the futility of giving in to the pirates. When the frigate George Washington docked in Algiers with a consignment of tribute, the Dey, to impress his master, the Sultan of Turkey, shanghaied the American ship to run an errand for him. The captain of the luckless ship, William Bainbridge, was forced to haul down the American flag and to run up the Algerian colors. The George Washington was commandeered to take a shipment of treasure, livestock, and some lions to the Sultan in Istanbul (Irwin, 1970).

Yusuf, the Pasha of Tripoli, seeing the weakness of the Americans, decided to increase demands on the United States. Among the trifles he ordered as part of the American tribute were several diamond-studded guns. On the occasion of the death of George Washington the Pasha informed President Adams that it was customary when a great man passed away from a tributary state to make a gift in his name to the crown of Tripoli. Yusuf estimated Washington to be worth about $10,000.

By the spring of 1801, Yusuf had heard nothing about his $10,000 and his impatience with America had grown to a fine rage. The Pasha summoned the American representative to his court, made him kiss his hand and decreed that, as a penalty, tribute would be raised to $225,000, plus $25,000 annually in goods of his choice. If refused, the alternative was war. To make his point, Yusuf had his soldiers chop down the flagpole in front of the American consulate, a significant gesture in a land of no tall trees-and one that meant war (Channing, 1968).

The reason for Yusuf's lack of tribute was that the United States had a new president — the former frustrated ambassador, Thomas Jefferson. Upon entering office, Jefferson had been appalled to discover that tribute and ransoms paid to Barbary had exceeded $2,000,000, or about one-fifth, of the entire annual income of the United States government.

Jefferson decided that a little "showing of the flage" in the Mediterranean was more appropriate than tribute. He ordered the frigates President, Essex, and Philadelphia and the sloop Enterprise to blockade Tripoli and convoy American shipping (Malone, 1970). This squadron, under Commodore Richard Dale, had to patrol and control a coastline over 1,200 miles in distance, which resulted in a "most desultory blockade." The lone success of the force was the defeat of a larger Tripolitan ship by Enterprise. Since there had been no declaration of war by the United States, the Barbary cruiser could not be taken as a prize. However, the captain of the Enterprise did have all of the corsair's guns thrown overboard before allowing the ship to continue on its way, with sixty casualties to his none (Channing, 1968).

Yusuf was so furious at his captain's defeat at the hand of the American "fat ducks" that he had him bastinadoed (beaten on the soles of his feet) and paraded backward on a donkey, his neck festooned with sheep's entrails (Castor, 1971).

At this time, U.S. naval enlistments were for only one year, so in March 1802, Commodore Dale sailed home. Congress still refused to declare war against Tripoli, but did levy a light war tax and proclaimed "protection of commerce" by the navy.