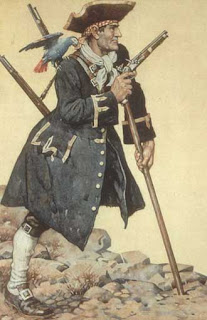 Piracy on the uptick during second quarter of 2007, as set out here:

The IMB notes that the surge in attacks means that the six monthly total to date remains approximately on par with last year, with the total number of attacks for the first six months of 2007 equalling 126, as compared with 127 for the corresponding period in 2006.

IMB’s recent report states that so far in 2007, 13 vessels were hijacked by heavily armed attackers, 152 crew members were taken hostage, 41 were kidnapped and three were killed. In 66 cases, either guns or knives were used.

Commenting on the second quarter figures, IMB Director, Captain Pottengal Mukundan stated: “Despite a sustained decrease in acts of piracy over the past three years, the statistics for the second quarter of this year suggest that we may be seeing a reversal of this trend. Somalia and Nigeria remain very dangerous, high risk areas with large numbers of violent kidnappings and hostage takings.”

In Nigeria, 19 incidents have been reported, including the boarding of 15 vessels and one hijacking. Forty crew members have been kidnapped and 24 taken hostage in 2007. These attacks appear to be orchestrated by a few local groups, claiming their actions are in pursuit of political goals. Offshore supply vessels and their crew are frequently identified as potential targets for kidnap and ransom, although cargo ships have also been targeted. ***
In Somalia, the IMB Piracy Reporting Centre has recorded 17 incidents to date in 2007. This is a dramatic increase over the ten attacks recorded for all of 2006.

"Piracy" as used by the IMB includes more than attacks on the high sea:

"Piracy is the act of boarding any vessel with an intent to commit theft or any other crime, and with an intent or capacity to use force in furtherance of that act."

IMB's 2006 annual report on piracy notes that more than half of the reported attacks occurred while the vessels were at anchor. Furthermore bulk carriers continued to be the targets of nearly a quarter of all attacks... 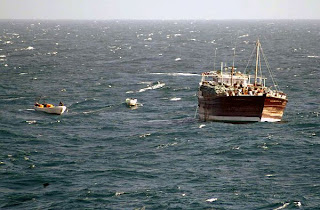 In most cases, modern pirates are not interested in the cargo and are mainly interested in taking the personal belongings of the crew and the contents of the ship's safe, which might contain large amounts of cash needed for payroll and port fees. In some cases, the pirates force the crew off the ship and then sail it to a port to be repainted and given a new identity through false papers...

As a result, many of the piracy issues described by the IMB are really local law enforcement issues for the country whose ports and anchorages are involved to take care of. Attacks by Somali pirates 200+ miles at sea are a different kettle of fish.