Land rush under the ice 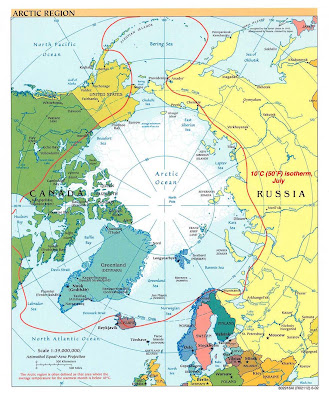 Russia leads the way in seeking "resource rich" subsurface territory under Arctic, as set out here:

Thinning ice in the Arctic has raised hopes of accessing energy reserves.

Russia's claim to a vast swathe of territory in the Arctic, thought to contain oil, gas and mineral reserves, has been challenged by other powers, including the US.

Moscow argued before a UN commission in 2001 that waters off its northern coast were in fact an extension of its maritime territory.

The claim was based on the argument that an underwater feature, known as the Lomonosov Ridge, was an extension of its continental territory. The UN has yet to rule upon the claim.

The teams aboard the mini-submarines Mir 1 and Mir 2 are expected to carry out scientific experiments and measurements on the seabed.

The Law of the Sea Convention allows states an economic zone of 200 nautical miles, which can sometimes be expanded.

To extend the zone, a state has to prove that the structure of the continental shelf is similar to the geological structure within its territory.

At the moment, nobody's shelf extends up to the North Pole, so there is an international area around the Pole administered by the International Seabed Authority.

The nominal purpose of the expedition is to provide new evidence proving the North Pole is an extension of Russia's coastal shelf (Lomonosov Ridge). Russia would thereby perfect earler claims to mineral rights the size of Germany, France and Italy combined - a region estimated to contain 10 billion cubic meters of hydrocarbons, plus diamonds and ores.

Under international law, Russia, the United States, Canada, Norway and Denmark control economic zones within 200 miles of their continental shelves. Russia laid claim to vast swaths of undersea Arctic territory in 2001. But the four other polar countries objected. Danish scientists maintain the Lomonosov Ridge is an extension of Greenland. The Russian expedition hopes to end the controversy with samples of the seabed unique to the motherland.