Once upon a time, a country had been invaded by its larger neighbor. Coalition forces opposed to this invasion were gathered in another neighboring country and at sea off the coast of the invaded state. The invader knew that the opposition was coming, but didn't know exactly where. Coalition leaders decided on a course of action, but needed to see if they could divert attention from their plan route of attack. So they set up a little deception:

During the Persian Gulf War (a.k.a. Operation Desert Storm, 1991), after a month of air attacks against Iraq, Allied forces were ready to move into Iraq-occupied Kuwait and begin the ground war. With 17,000 Marines in ships off the coast of Kuwait City, the Foxtrot platoon from SEAL Team One had the mission of creating a diversion. The plan was to make the Iraqis believe that Allied forces were planning an amphibious attack.

In the dark of night, the SEAL team approached the Kuwaiti shore in landing boats, stopping about 500 yards out and swimming the rest of the way in. Each SEAL towed a 20-pound case of explosives. Right under enemy noses, they planted the explosives on the Kuwaiti beach and swam back to their boats. The explosives were set to go off at 1 a.m.

As the land explosives went off, the SEALs fired automatic weapons and launched grenades, creating a huge amount of noise that caught the attention of the Iraqis. The noise, combined with the force of Marines seen off the coast, convinced the Iraqis that the attack was coming from the sea. They pulled two divisions from the front line and moved them to the coast, only to find the SEALs and the Marine diversion gone. The ground war began against a much weakened Iraqi force.

Effective and in keeping with the traditions of an idea spawned during WWII - Navy Beach Jumpers:

Beach Jumpers were United States Navy tactical cover and deception units which were organized under Admiral H. Kent Hewitt, then Commander, Amphibious Forces, and all U.S. Naval Forces in Northwest African waters and the Western Mediterranean. The concept for Beach Jumpers came about as a result of then Lieutenant Douglas Fairbanks, Jr., the Hollywood actor turned naval officer during World War II having been detached from "Blue water" duty on the high seas and assigned to duty with British Admiral Lord Louis Mountbatten Combined Operations (Commandos) in England.

Lieutenant Fairbanks assignment was to be one of those temporary duty officer exchange programs where American Officers would acquaint themselves with the training, planning, and execution of raiding parties, diversions, and deception operations. Lieutenant Fairbanks however did more than just observe the workings of these commandos. He trained with them at the aptly named H.M.S. Tormentor Advanced Training and Amphibious Operations Base, and at the Commando Training School at Ancharry Castle, Scotland. Subsequently, he participated in several cross channel harassment raids from the Isle of Wright which was the forward base for such activities. It was during these raids that Lieutenant Fairbanks gained a true appreciation for the military art of deception.

Lieutenant Fairbanks was subsequently transferred to Virginia Beach where he came under the command of Admiral Hewitt who was supervising the training of U.S. Naval forces in preparation of their deployment to North Africa and the Mediterranean. It was here that the brash movie star now Naval Lieutenant pitched his idea for a similar unit of specialists trained to conduct tactical cover, diversionary and deception missions. Admiral Hewitt immediately saw the advantages of such a unit and agreed to support Fairbanks. All that was required now was to sell the Navy brass in Washington.

In Washington, Fairbanks was at his persuasive best. Inspired by the success of British Commandos in using sonic deception on raids against the Nazis and Fairbanks' concept of operations, Admiral Ernest J. King, Commander-in-Chief, U. S. Fleet, and Chief of Naval Operations issued a secret letter on 5 March 1943 charging the Vice Chief of Naval Operations with the recruitment of 180 officers and 300 enlisted men for the Beach Jumper program.

The recruiting effort identified four general requirements: (1) no seasickness, (2) experience in small boat handling, (3) enough electrical knowledge to fix a home radio, and (4) at least fundamental knowledge of celestial navigation. The announcement further stated that "The Navy is requesting volunteers for prolonged, hazardous, distant duty for a secret project ".

"To assist and support the operating forces in the conduct
of Tactical Cover and Deception in Naval Warfare"
***
The Beach Jumpers mission would be to conduct deception operations in which they would simulate amphibious landings with a very limited force. Utilizing their deception equipment the Beach Jumpers would lure the enemy into believing that theirs was the location of the amphibious beach landing, when in fact the actual amphibious landing would be conducted at another location. Beach Jumper Unit-1 (BJU-1) did not have to wait long to be tested. Their first operation was to be "HUSKY", the assault on Sicily.

On the night of 10 July 1943, Beach Jumper Unit-1 was ordered to conduct a diversion off Cape San Marco, 100 miles west of the HUSKY landing area. The first attempt was recalled due to hazardous seas. On D+1, the weather was better and the operation began at 2200 hours. At 3,000 yards off shore, three of the ASRs prepared their heaters, one ASR proceeded a thousand yards ahead and began to lay smoke. As the sound boats prepared to make their run parallel to the beach, a searchlight from Cape San Marco illuminated the area, accompanied by small arms and artillery fire. At 0230 the sound boats were ordered to secure their heaters and close the beach, which they did, firing guns and rockets. All boats retired on a course back to there home port at Pantelleria, Sicily at 0730 hours.

To keep the Germans attention, Commander Robinson was ordered to conduct another operation on the night of 12 July 1943, using all available craft. This time the shore batteries were completely alerted. The Germans were convinced that a landing was about to take place. Salvos of six inch and smaller guns were thrown at the boats. The operation was a success and no casualties were sustained.

Operation HUSKY accomplished complete surprise due to the uncertainty created in the minds of some German Commanders by the BJU-1 diversions and strategic cover and deception operations. BJU-1 was responsible for an entire German Reserve Division being held in place, as the German Command was unsure where the actual landing would take place.

Other successful missions followed, but the "Beach Jumpers" were decommissioned after WWII, and then revived from 1951-1972. The tale of their rebirth is here and the mission of the Beach Jumpers came to include psychological warfare, electronic deception and other capabilities. Along the way they dabbled with hydrofoils that could be "shot" from torpedo tubes. 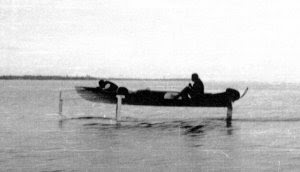 Photo of the "CIGAR" hydrofoil from here.

Missions evolve and so does equipment and ownership of the missions the Beach Jumpers grew to perform. These missions now belong to Navy Information Operations Command, which proudly notes its heritage:

Navy Information Command (NIOC) Norfolk has a long, august history traversing seven decades, tracing back to WWII efforts to incorporate Military Deception (MILDEC) in support of Naval amphibious operations, and building on lessons learned following the tragedy at Dieppe in 1942. In March 1943, LT Douglas Fairbanks, Jr., conceptualized tactical cover and deception operations employing small units to simulate amphibious landings, thereby deceiving and confusing the enemy. These units became known as the Beach Jumpers and remained active until shortly after WWII ended. The Beach Jumpers were reactivated during the Korean War with a secondary mission to plan and execute Psychological Operations, and by 1960 were re-designated as Beach Jumper Units (BJU) 1 (San Diego) and 2 (Norfolk).

In 1972, the Chief of Naval Operations re-designated the Beach Jumpers as Fleet Composite Operational Readiness Groups (FLTCORGRU ONE and TWO) to emphasize the importance of BJU operations to Naval Warfare during the Vietnam conflict. Subsequently, in 1986 the FLTCORGRU's were re-designated as Fleet Tactical Deception Group Pacific and Atlantic (FLTDECGRUPAC/FLTDECGRULANT) with a new mission to assist commanders in planning and executing tactical MILDEC operations during the course of the Cold War.

Beginning in 1992, a series of command mergers and name changes occurred that ultimately resulted in the establishment of Fleet Information Warfare Center (FIWC) in 1995. Those mergers included: FLTDECGRULANT combining with Fleet Electronic Warfare Support Group (FEWSG) to form the Fleet Tactical Readiness Group (FTRG); in 1994 FTRG and FLTDECGRUPAC changed their names to Command and Control Warfare Group Atlantic and Pacific, which became FIWC Headquarters and FIWC Detachment San Diego on 1 October, 1995. It is important to note that the evolutionary path leading to FIWC's establishment was a product of the maturation of Information Operations (IO).

So the innovation begun by a "Hollywood actor" goes on... 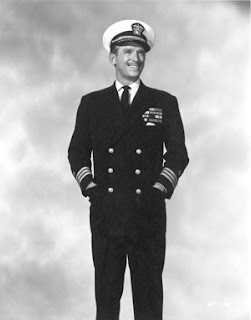 For much more information than that which I have "liberated" from the excellent Beach Jumper website, go visit the U.S. Navy Beach Jumper Association site here.