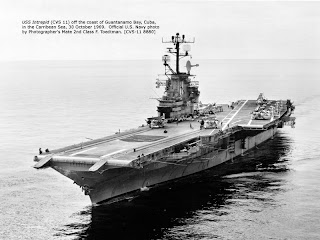 Contingency plan #107: If all else fails, use that old aircraft carrier as an EOC, as set out here:

The aircraft carrier Intrepid _ in the midst of an 18-month makeover _ will return to Manhattan next fall prepared for double duty: its renewed status as a floating military museum, and a future as a potential command post in the event of another terrorist attack.

"Upon its return, it will stand at the ready should we need her," said Mark Mershon, head of the FBI's New York office. The legendary World War II ship was retrofitted with an onboard facility that could double as an emergency operations center if needed, he said Thursday.

The Intrepid is considered ideal for a law enforcement because it could be immediately and easily converted into a full-fledged, secure auxiliary emergency operations post with air, sea and land capability, said Bill White, president of the Intrepid Sea, Air & Space Museum.

A little of her story here.

You know, there are some other places (Los Angeles, San Francisco, etc) that might want to consider floating contingency EOCs. Others, namely Professor Whitehurst at Clemson University, has suggested outfitting ships for seaborne disaster relief...as set out here.

See also Disaster Logistics. About 50% of the U.S. population lives within 50 miles of a sea coast. See here:

So if we just limit it to within 50 miles of the coastline, what we found as of when we were looking at Census 2000 data was that there were 137.5 million people – and that’s 48.9 percent of the U.S. population – lived within just this 50-mile zone of the coast.

Some other large percent lives with 50 miles of navigable waterways, and, should roads and bridges be damaged, the best highway to get assistance into some areas is by water...

Generally, the discussion of such seaborne effort contemplates carrying some emergency equipment on board ships, loading more at ports enroute to a disaster and having the ships deliver water, food, shelter, emergency medical supplies, fuel, shelter for emergency workers, security forces, and the like. There are several Ro-Ro ships that could do this job but it's a matter of funding to keep a couple of them on standby at locations where they are out of harm's way, but available on short notice if needed.
Posted by Mark Tempest at 7/27/2007 07:49:00 AM

Email ThisBlogThis!Share to TwitterShare to FacebookShare to Pinterest
Labels: Disaster Relief from the Sea