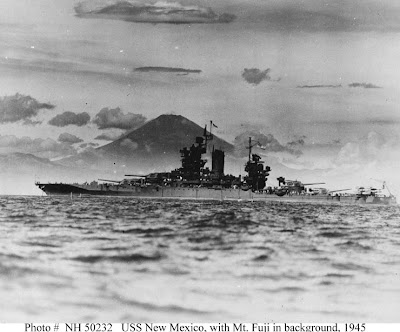 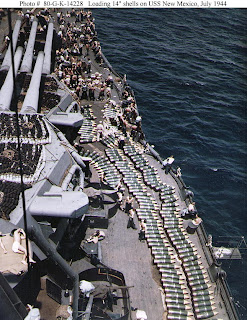 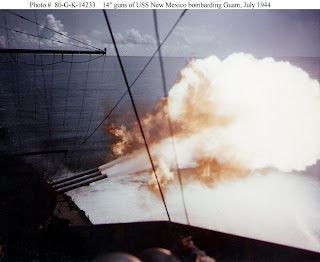 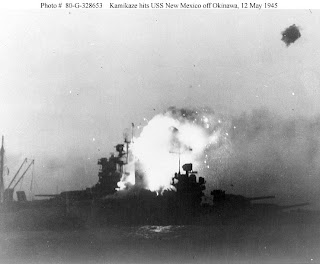 USS New Mexico, lead ship of a class of three 32,000-ton battleships, was built at the New York Navy Yard. Commissioned in May 1918, she spent the rest of the First World War operating near the United States, but steamed to Europe early in 1919 to escort President Wilson home from the Versailles peace conference. Later in the year she became flagship of the Pacific Fleet. A regular participant in Battle Fleet exercises in the Pacific and Caribbean in the 1920s and 1930s, she visited Australia and New Zealand in 1925, also calling on South American ports during the '20s.

Extensively modernized at the Philadelphia Navy Yard beginning in March 1931, New Mexico's work, completed in January 1933, greatly altered her appearance. Her original "cage" masts were replaced by a then-modern tower superstructure, and many other improvements were made to her armament and protection. In 1940, her base was relocated to Pearl Harbor as a deterrent to Japan, but New Mexico was sent to the Atlantic in May 1941 to meet the menace presented by German successes in Europe.

New Mexico returned to the Pacific in early 1942 to help reinforce a Pacific Fleet that had been badly crippled by the Japanese attack on Pearl Harbor. During most of 1942 she operated off the U.S. west coast and in Hawaiian waters, then went to the southwest Pacific until May 1943, when she arrived in the Aleutians to take part in operations to recapture Attu and Kiska.

In late 1943 and early 1944, New Mexico provided heavy gunfire support to invasions in the Gilbert and Marshall Islands. A bombardment of Japanese positions on New Ireland followed in March 1944, and in June and July the battleship helped in the conquest of Saipan, Tinian and Guam. Following a Stateside overhaul, New Mexico took part in the capture of Mindoro and Luzon. During the later operation, on 6 January 1945, she was hit by a suicide plane that killed and injured over a hundred of her crew. The ship was able to remain in action, however, for several more days.

After repairs, New Mexico participated in the Okinawa invasion in March-May 1945. She was again hit by a "Kamikaze" on 12 May, with her crew suffering over 170 casualties. Preparing for the Invasion of Japan during the War's last months, she was present in Tokyo Bay when Japan formally surrendered on 2 September. Transiting the Pacific and Panama Canal for a final time, New Mexico arrived in Boston, Massachusetts, in mid-October 1945 and was decommissioned there in July 1946. She was sold for scrapping in October 1947.