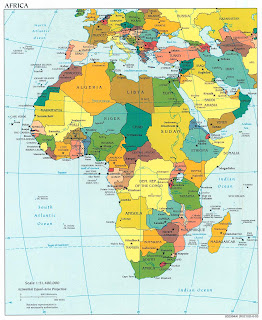 Indicator that Africa is on its way up here:

Africa is booming. Three words that have not been strung together in a positive context for a long time. They were uttered by a global freight forwarder who was enthusing about the rapidly growing cargo volumes being transported from the major centres of Africa.
Apart from the occasional genocide and mayhem, the continent is enjoying one of its most strife-free periods in decades. The peaceful environment is allowing development to thrive, boosting the economies of Africa's powerhouse nations South Africa and Nigeria and creating strong trade across borders and overseas.
Much of the inbound cargo growth in Africa has been a consequence of the development of telecommunications infrastructure, oil exploration and mining equipment, with surging demand for a broad range of consumer products. Chinese president Hu Jintao has been striking trade deals worth hundreds of millions of dollars at every stop in his current Africa tour. Exports from the continent are dominated by perishables.
Capitalising on their proximity to the major African markets and their pivotal position between east and west, airlines in the Middle East are aggressively competing for market share on the booming continent. Emirates, Qatar, Etihad, Gulf and Saudia are expanding networks and transhipment operations via their Persian Gulf hubs. It is not all Middle East carriers, however. Air France is one of the biggest players in the African market with flights to more than 30 points.