Maritime Security in the Black Sea 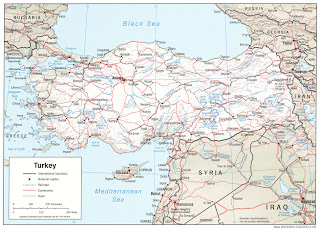 An issue being addressed here:

The US Department of Defense has drafted a new strategy for the Black Sea region, focusing on getting the individual countries around the Black Sea to develop a regional approach to security issues.

Some of the strategy’s finer points are still being developed, and the implementation may be slowed by the US preoccupation with Iraq and Afghanistan. But it nevertheless represents a concerted effort by Washington to get involved in a region traditionally dominated by Turkey and Russia.

To that end, the United States is throwing its weight behind Turkey’s leadership in Black Sea regional efforts. That’s in part because Ankara and Washington share the same goals in the area, and, in part, because Washington wants to allay Turkish concerns about American intentions.

The strategy’s main concept was completed late last year and it remains classified. But its general outline was described to EurasiaNet by a Pentagon official, speaking on condition of anonymity. US officials are still in the process of relaying the strategy’s contents to regional governments, including Turkey, Georgia, Ukraine, Russia, Romania, Bulgaria, Moldova, Armenia, Azerbaijan and Greece. First to be briefed was Turkey, in acknowledgement of Ankara’s leadership role in the region. "Without Turkey, we can’t get this to work," the official said.

The other key Black Sea player is Russia, and the Pentagon has low expectations on Moscow’s willingness to go along with US plans. "We don’t expect the Russians to be cooperative; they see this as interference in their sphere of influence. However, we’re committed to seeking Russian cooperation wherever we can get it ñ we don’t want them as an adversary," the official said. "However, we won’t allow ourselves to be held hostage to Russian objections."

The US is actively encouraging countries around the Black Sea to take part in the Turkey-led Black Sea Harmony maritime security program, through which intelligence on sea traffic is shared among all the coastal states. In December, Russia became the first country to formally join the program. Ukraine and Romania are also reportedly close to joining. Georgia’s navy is not large enough to provide any significant intelligence, although it does participate in information exchanges.