A piracy encounter in the Gulf of Aden 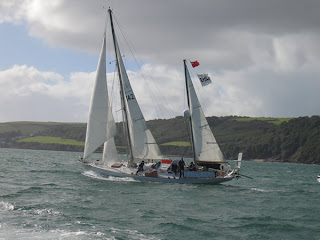 On Monday 12 February, the Gipsy Moth IV came under threat by pirates while sailing through the Gulf of Aden, an area off Yemen, the Horn of Africa notorious for piracy.
***
Precautions were taken and six Blue Water Rally yachts surrounded the 53ft ketch through the waters.

It was reported that at approximately 9.20am, a small vessel was spotted by two of the rally yachts that had not shown up on radar. As the vessel moved closer the Blue Water Rally yachts adopted a tight formation around the Gipsy Moth IV as it was clear that it was not a fishing party..

Seemed to have turned out okay, though-

Within a few minutes, by coincidence, a friendly warship appeared ahead and hailed the formation to ask for more details of the encouncer. Soon after the trailing boats faded from sight.

A fast patrol craft then approached the formation full of armed men who had come across from the warship to hear the leader's report first hand.

The entire incident lasted only half an hour.

More info on the Blue Water Round the World Cruising Rally" here. More info on the Gipsy Moth IV here. If you don't know the story of Sir Francis Chichester, then read this.
Posted by Mark Tempest at 3/02/2007 11:02:00 PM