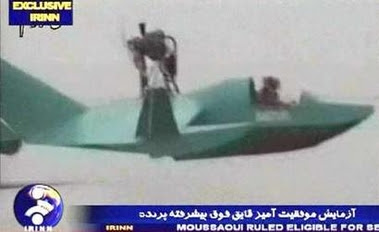 Described as a "Doctrine of Asymmetric Naval Warfare" here:

...{T}he Iranian concept of Alavi/Ashurai warfare relies not just on spiritual commitment, but also on high-tech weaponry and innovative tactics—a combination employed to great effect on the ground in southern Lebanon by Iran’s protege, the Lebanese Shiite Hizballah, in its war with Israel this summer.

The article goes on to cover the Iranian concept of "dispersed swarming" by its small combatants:

ANd they have a plan:

In wartime, Iranian naval forces would seek to close the Strait of Hormuz and destroy enemy forces bottled up in the Persian Gulf; therefore speed and surprise would be key. Iranian naval forces would seek to identify and attack the enemy’s centers of gravity as quickly as possible and inflict maximum losses before contact with subordinate units were lost as a result of enemy counterattacks. Geography is Iran’s ally.