A maritime "What if?" 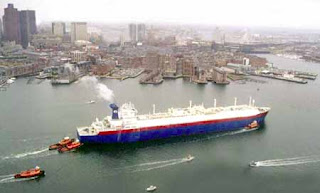 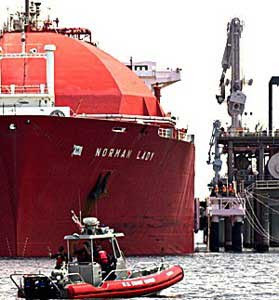 A Stephen Flynn thriller here. With the intro: "In The Edge of Disaster, a security expert warns that the US is not prepared for future disasters"

Small boat attacks on an oil tanker and on an LNG carrier. Some of it is based on the absolute worst case. For example, after the terrorists manage to get close enough to the LNG tanker, they have a bomb that is able to penetrate both hulls of the ship and crack the containment LNG vessel inside.

Because LNG is stored at such low temperatures in liquid form, it does not explode. However, it does burn at extremely high temperatures. Once started, a gas fire cannot be extinguished; it has to burn itself out. In a report released by Sandia National Laboratory in December 2004, scientists determined that should a large LNG spill on water be ignited, it would burn at 3000 degrees Fahrenheit for 30 minutes to an hour, throwing off enough heat to incinerate everything within four-tenths of a mile of the vessel. This includes steel, which melts at 2300 degrees Fahrenheit and has no strength left if it is exposed to a temperature of 1200 degrees for 10 minutes. Beyond that range, the threat to most buildings would be from secondary explosions of hazardous materials within the area of the original fire or the result of failed efforts by firefighters to contain it. Even in protective clothing, firefighters could get no nearer than 1.3 miles away from the fire until it started to burn itself out. Those people outside this range but within the second-mile radius of the fire would suffer second-degree burns on unprotected skin within about 30 seconds. However, most would likely be able to get to shelter and avoid this exposure.

Of course, disaster planners must consider the worst case, though in many cases, that case is among the least probable scenarios. In the past, I have said that LNG tankers are hard targets for terrorists. First, the ships are now double-hulled, and the LNG tanks well protected.

Second, LNG is not compressed. 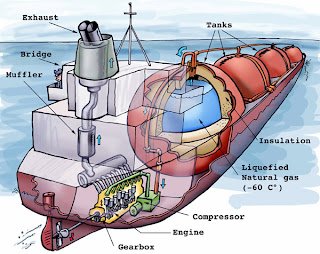 Take a look at what Mr. Flynn has to do to get the result he wants:

The reason Khalid needed additional recruits was that he had determined it would take a minimum of two Zodiacs to carry out the attack on the LNG ship. First, there was always a chance that the Coast Guard would get lucky and intercept or succeed at firing at and hitting one of the boats before it reached the target. Second, according to reports he had read, there was some debate among experts as to whether the rupture of a single six-million-gallon double-walled cargo tank would be sufficient to ignite the entire vessel and its load of 30 million gallons. A safer bet would be to breach two of the ships’ five tanks.

And, unstated in his piece, is the idea that conditions at the site of the attack are virtually windless and the released LNG does not immediately expand and dissipate completely, though it expands just enough to become flammable. The situation has to be just right because as the FERC once noted:

Is LNG explosive?
In its liquid state, LNG is not explosive. When LNG is heated and becomes a gas, the gas is not explosive if it is unconfined. Natural gas is only flammable within a narrow range of concentrations in the air (5%-to-15%). Less air does not contain enough oxygen to sustain a flame, while more air dilutes the gas too much for it to ignite.

Some members of the public have raised concerns about the possibility of LNG explosions. LNG is not stored under pressure. If the tank is ruptured, there is no massive release of energy and thus no explosion. If an object of force such as a missile punctured an LNG tank a fire could result but the tank would not explode.

For an explosion to occur, LNG must first return to its gaseous state and then the natural gas vapors must accumulate in a confined space in a perfect mixture, of 5% to 15% of gas in air, and encounter an ignition source.

Possible? Sure, so is a meteor striking the Empire State Building. Likely- not so much. There are too many easier targets for terrorists.

Does this mean that no precautions should be taken?

No, it's only prudent to take sensible safety measures. After, all, the "Perfect Storm" does occasionally happen.

However, panic is not required.

UPDATE: Another look at an LNG tanker hull: 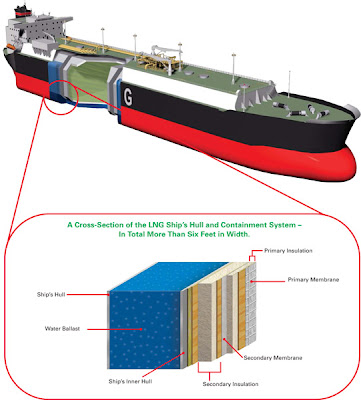 UPDATE2: Sandia Labs report available here. Look at the pdf listing on the right side for "LNG Safety Study: Guidance on Risk Analysis and Safety Implications of a Large Liquefied Natural Gas Spill Over Water."
Posted by Mark Tempest at 3/08/2007 07:31:00 AM