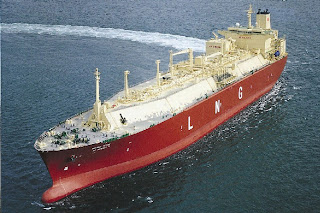 The congressional hearing was three weeks before regulators in California are to take a key vote on the BHP Billiton proposal to build an LNG terminal near Mal­ibu. Some coastal residents op­pose the project, and the possibility of a terrorist attack or accident at the floating gas terminal is a major objection to them.
A General Accounting Office report issued a week ago said not enough research has been done on the effects of a leak, spill or sabotage on LNG ships.
The Congressional hearing last week gave representatives an opportunity to ask federal agencies about the safety of the rapidly expanding LNG import industry. It was accompanied by a closed-door session on terrorism and LNG facilities that included secret briefing materials.
“Coast Guard assets are aging by the day, and I am concerned about whether or not the Coast Guard has the assets to meet this growing mission,” said Com­mit­tee Chair Bennie Thompson, D-Louisiana.
***
The Coast Guard air and sea fleet is in a state of distress right now, with a half dozen ships showing hull cracks after a modernization program failed, leaving the ships and cutters unsafe and unusable. New helicopters are be­hind schedule and over budget, and the new GAO report warns that the Coast Guard may not be equipped to handle the task of guarding five existing LNG terminals, 15 LNG terminals in the permitting process, and another 25 or so proposed.
***
Some California decision-makers in behind-the-scenes meetings with anti-LNG activists have reportedly raised the possibility of an LNG tanker being hijacked “and rammed into Santa Monica.”
At last Wednesday’s hearing, an official with the Federal Energy Regulatory Commission downplayed the dangers of a terrorist attack, saying the worst-case scenario imaginable is a “pool fire” of spilled LNG that would burn for a half hour. “If you read the popular press, it (the danger) is overblown,” said J. Mark Robin­son, FERC’s director of energy projects.
“What they are talking about is second degree burns on exposed skin one mile away if you hold your arm out for a minute,” he told the committee. “If you just move away within 20-to-30 seconds, you won’t have a burn.”