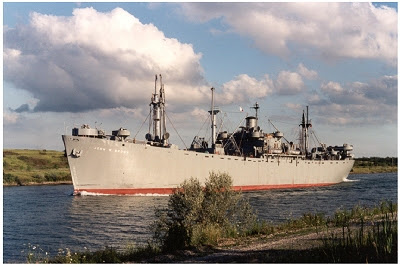 There are still a couple of survivors around, kept alive by memories and more than a little intensive care. When war raged, they got ready to carry the war to the enemy and to move mountains of supplies to besieged friends across the seas. Almost 3000 strong, they transported the products of the "arsenal of democracy" to foreign shores.

They were slow, prone to cracking under pressure.

They were the Liberty ships.

As war raged in Europe, the lack of merchant ships for the United States lead to the construction of new ships, based on an English merchant design, built by using mass-production techniques that allowed ships to be completed in as little as four and a half days:

"Liberty ship" was the name given to the EC2 type ship designed for "Emergency" construction by the United States Maritime Commission in World War II. Liberty ships were nicknamed "ugly ducklings" by President Franklin Delano Roosevelt. 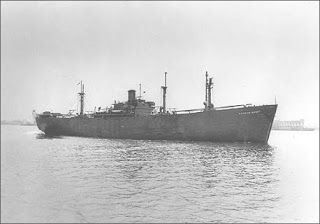 The first of the 2,751 Liberty ships was the SS Patrick Henry, launched on Sept. 27, 1941, and built to a standardized, mass produced design. The 250,000 parts were pre-fabricated throughout the country in 250-ton sections and welded together in about 70 days. One Liberty ship, the SS Robert E. Peary was built in four and a half days. A Liberty cost under $2,000,000.

The Liberty was 441 feet long and 56 feet wide. Her three-cylinder, reciprocating steam engine, fed by two oil-burning boilers produced 2,500 hp and a speed of 11 knots. Her 5 holds could carry over 9,000 tons of cargo, plus airplanes, tanks, and locomotives lashed to its deck. A Liberty could carry 2,840 jeeps, 440 tanks, or 230 million rounds of rifle ammunition. [NB E1: For a clear explanation of ship tonnage, see here]

Liberty ships were named after prominent (deceased) Americans, starting with Patrick Henry and the signers of the Declaration of Independence. 18 that were named for outstanding African-Americans.

Any group which raised $2 million dollars in War Bonds could suggest a name for a Liberty ship, thus, one is named for the founder of the 4-H movement in Kansas, the first Ukrainian immigrant to America, an organizer for the International Ladies Garment Union, and the woman who suggested the poppy as a symbol of American soldiers who died in World War I. The Francis J. O'Gara was named after a mariner who was presumed dead, but who in fact, was a Prisoner of War. He was the only person to visit a Liberty ship named in his honor.

Words fail to adequately represent the capacity of these ships. 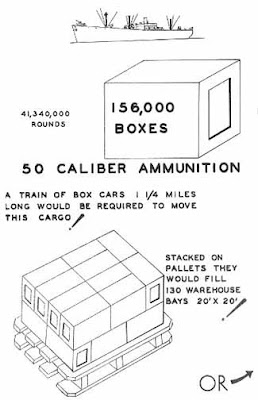 The excellent site American Merchant Marine at War, www.usmm.org run by Dan and Toni Horodysky has a superb brochure that graphically demonstrates what the Liberty ships could haul across the world. The graphic to the right is part of that brochure.

The Liberty ships served well, and much longer than their designed life span:

Many technological advances were made during the Liberty shipbuilding program. A steel cold-rolling process was developed to save steel in the making of lightweight cargo booms. Welding techniques also advanced sufficiently to produce the first all-welded ships. Prefabrication was perfected, with complete deckhouses, double-bottom sections, stern-frame assemblies and bow units speeding production of the ships. By 1944, the average time to build a ship was 42 days. In all, 2,751 Liberties were built between 1941 and 1945, making them the largest class of ships built worldwide.

Each Liberty ship carried a crew of between 38 and 62 civilian merchant sailors, and 21 to 40 naval personnel to operate defensive guns and communications equipment. The Merchant Marine served in World War II as a Military Auxiliary. Of the nearly quarter million volunteer merchant mariners who served during World War II, over 9,000 died. Merchant sailors suffered a greater percentage of fatalities (3.9%) than any branch of the armed forces.

The Liberty ship was considered a "five-year vessel" (an expendable, if necessary, material of war) because it was not able to compete with non-emergency vessels in speed, equipment and general serviceability. However, Liberties ended up doing well, plodding the seas for nearly 20 years after the end of World War II. Many Liberties were placed in the reserve fleet and several supported the Korean War. Other Liberties were sold off to shipping companies, where they formed the backbone of postwar merchant fleets whose commerce generated income to build the new ships of the 1950s and 1960s. However, age took its toll and by the mid-1960s the Liberties became too expensive to operate and were sold for scrap, their metal recycled. The first Liberty built, the Patrick Henry, was sent to the ship breakers (scrap yard) in October 1958.

Of the nearly 3,000 Liberty ships built, 200 were lost during World War II to enemy action, weather and accidents. Only two are still operational today, the SS Jeremiah O'Brien and the SS John W. Brown.

That's the John W. Brown at the top of this post.

As noted above, some 17 of the Liberty ships wer named after African Americans and black Americans played a significant role as set out here:

Of the approximately 2,700 Liberty Ships, 17 were named for outstanding African-Americans. The first, in honor of Booker T. Washington, was christened by Marian Anderson in 1942. Captain Hugh Mulzac, an African-American, served as master of the ship for four years, delivering troops and supplies to the war zones. Adrian T. Richardson, John Godfrey, and Clifton Lastic also captained mixed-race crews during WWII.

In 1942, against overwhelming odds, Captain Hugh Mulzac became the first African-American merchant marine naval officer to command an integrated crew during World War II. Born March 26, 1886 on Union Island, St. Vincent Island Group, British West Indies, Mulzac entered the Swansea Nautical College in South Wales to prepare for a seaman's career while in his youth. He became an American citizen in 1918, and continued his training at the Shipping Board in New York. He earned his captain's rating in the merchant marine in 1918, but racial prejudice denied him the right to command a ship.

Later Mulzac was offered the command of a ship with an all-black crew. He refused, declaring that "under no circumstances will I command a Jim Crow vessel." Twenty-two years passed before Mulzac would again receive an offer to command a naval ship. During World War II, his demand for an integrated crew was finally met, and he was put in command of the SS Booker T. Washington. 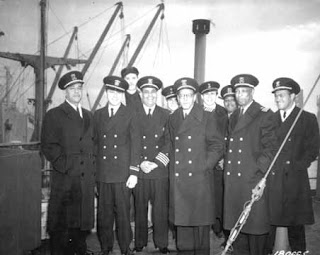 With its crew of eighteen nationalities, the Booker T. Washington made twenty-two round-trip voyages in five years and carried 18,000 troops to Europe and the Pacific. On the day his ship was launched, Mulzac recalled, "Everything I ever was, stood for, fought for, dreamed of, came into focus that day... The concrete evidence of the achievement gives one's strivings legitimacy, proves that the ambitions were valid, the struggle worthwhile. Being prevented for those twenty-four years from doing the work for which I was trained had robbed life of its most essential meaning. Now at last I could use my training and capabilities fully. It was like being born anew." (photo: "Captain and crew of a new Liberty Ship [SS Booker T. Washington] just after it completed its maiden voyage to England. (L-R) C. Lastic, Second Mate; T. J. Young, Midshipman; E. B. Hlubik, Midshipman; C. Blackman, Radio Operator; T. A. Smith, Chief Engineer; Hugh Mulzac, Captain of the ship; Adolphus Fokes, Chief Mate; Lt. H. Kruley; E. P. Rutland, Second Engineer; and H. E. Larson, Third Engineer." Captain Hugh Mulzac is fourth from the left on the first row. February 8, 1943. Baum. 111-SC-180665. [photo from National Archives])

As industrial production shifted into high gear and the draft took young men, male workers became scare, and "Rosie the Riveter" began to work in the shipyards, cranking out Liberty ships. Today an new National Park is being developed to honor all the "Rosies" of the time. The park is located in Richmond, California, home of several of the Kaiser shipyards.

As the war progressed, the Liberty ships were supplemented by Victory ships. But that's a tale for another time. 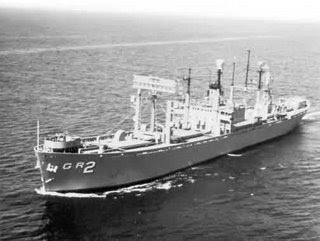 The Navy continued to find uses for the old Liberty hulls, including converting for use several as offshore radar platforms, as set out here in an earlier Sunday Ship History.

So, offer up a salute to these great cargo ships of the past and to the brave men who sailed them and helped defeat our enemies. 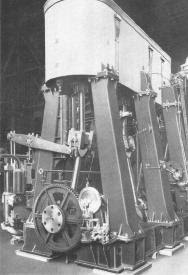 The engine of a Liberty ship from Project Liberty Ship:

Fully assembled, the engine weighs 270,000 pounds. It stands 19 feet tall and is 21 feet long. The ship's four-bladed propeller, 18 feet in diameter, is directly coupled to the engine, which is designed to turn at a maximum of 76 rpm. This gave Liberty ships a top speed of about 11 knots. Aboard the BROWN the engine is normally run at 65 rpm, which saves fuel and is easier on the engine. This gives an average speed of around 10 knots. Power output from the engine is 2,500 horsepower. Fuel consumption is about 170 barrels (30 tons) of oil per day at 11 knots, giving a range of 19,000 nautical miles.

One of the most dramatic acts of heroism occurred Sept. 27, 1942, in the South Atlantic on the Liberty ship SS Stephen Hopkins. She came upon the heavily-armed German raider Stier, disguised as a neutral ship, and her escort, the Tannenfels. When the Hopkins refused to surrender, both vessels shelled her.

The Hopkins fought back valiantly. With his ship in flames and her stern gun-crew dead, engine cadet Edwin O'Hara, from the U.S. Merchant Marine Academy, fired the last five available shells, setting the Stier on fire. O'Hara, killed by shrapnel, and 40 others went down with the ship. The Stier blew up and sank. The 19 survivors of the SS Stephen Hopkins set off on a 2,000-mile, 31-day voyage to Brazil in a lifeboat during which four crewmen died.

Captain Paul Buck, O'Hara and three officers were given the Distinguished Service Award posthumously. The Hopkins received the Gallant Ship Award. The U.S. Merchant Marine Academy is the only Federal academy authorized to carry the Battle Standard Flag, by virtue of her 142 Cadets killed in action.

UPDATE: I am getting some interesting referrals on this post, not the least of which is EverestKC which appears to be a Kansas cable provider that linked to my post because it has a reference to "Liberty" which is the name of a town (well, maybe 17 townships so named) in said fair state. For those of you who have thus been led to my site, I bid you welcome. I'm sure that the 95 residents of Liberty (located at 37°9′22″N, 95°35′53″W)would appreciate a visit, too. And probably the other 16 locations, too. In any event, it's a long way from any one of those townships to the ocean.
Posted by Mark Tempest at 3/25/2007 06:10:00 PM