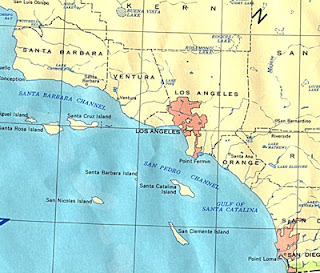 After being trumped on safety and security issues, the forces opposed to an offshore LNG terminal off Ventura County now begin an new series of whines "it's ilegal" and "it will won't help with pollution." All set out here:

Promised steps to reduce emissions from tankers and tugboats will more than offset air pollution generated by a proposed liquefied natural gas terminal off the Ventura County coastline, a new environmental impact report on the project concludes. But because those emission reductions won't be restricted to the area near the terminal, local residents won't directly benefit from most of them, the report indicates.
***
Supporters of BHP Billiton's project argue that safety precautions will reduce any risks associated with the transport of flammable cargo to acceptable levels and contend that the state needs to tap new sources of energy.

Project opponents say the risk of a tanker accident, terrorist attack or pipeline rupture is too great. Other critics say the terminal and associated construction and ship traffic would pollute Ventura County's air and have raised questions about the integrity of the regulatory process intended to safeguard the health of local residents.

"For us, this project is illegal to begin with," said Susan Jordan of the California Coastal Protection Network. She contends the regulatory process has been improperly manipulated to benefit BHP Billiton and has hired attorneys to comb through documents looking for evidence. ***
Although the possible threats of explosion and fire initially drew most public concern about the BHP Billiton project, several risk assessments by independent experts have largely discounted those fears. Even under a worst-case scenario, the analysts concluded, the floating terminal would pose no threat to anyone onshore, although a catastrophic leak and fire could overlap shipping lanes in the Santa Barbara Channel and threaten boaters.

Air pollution has since emerged as the principal focus of contention over the project. Those concerns were heightened by the decision of the U.S. Environmental Protection Agency, which has authority over the project's required air-quality permits, to apply the more lenient pollution standards in place on the Channel Islands rather than the stricter ones applicable onshore.

The agency initially ruled that Ventura County's onshore rules would apply, which would have required BHP Billiton to offset every pound of pollutants associated with the project. The EPA later reversed itself, prompting charges — raised a year ago by critics and echoed this week by Rep. Henry Waxman, chairman of the House Committee on Oversight and Government Reform — that political appointees in the agency had intervened improperly in the regulatory process.