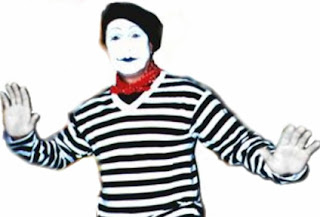 Ripped from the website of Weekly World News, a story the rest of us seem to have missed:

-- NASA has named its first mime in space, Jacques Tatitov, who will perform in the vacuum outside the International Space Station.

The mime has been characteristically tight-lipped about his space routine, which is rumored to include exercises such as 'Walking Against the Solar Wind' and 'Unpeeling a Banana-Flavored Thermostabilized Pudding Ration.'