One of the key developments that has absorbed Washington’s attention deeply, and resulted in the very significant personal involvement of Vice President Dick Cheney, was the fact that the Iranian Revolutionary Guards have invaded and seized almost all meaningful control of the strategic Masandam Peninsula in Oman - a peninsula that covers the Southern mouth of the Straight of Hormuz. Occupying this peninsula solidifies Iran’s complete control of the straight. The Northern chokepoint has long been Iran’s; the Southern chokepoint has long been Oman’s. They are now both Iran’s. The Revolutionary Guard also decided to make this area their own, because it makes for a smuggler’s paradise. And smuggling is one of their #1 jobs. A priority for the Guard is to engage in as much profitable illegal activity, on a global scale, as they can, in order to pay for their very existence, and help bankroll the country’s nuclear program. And, long anticipating the oncoming sanctions, the Guard has kept an eye on various ways to keep goods flowing into the country. Their new stronghold in Oman, with such control over the Straights, provides for just that.

And Oman, terrified of the direct confrontation with Iran that our military has planned and suggested, has decided to do nothing.

Ah, both sides of the chokepoint? Yikes! 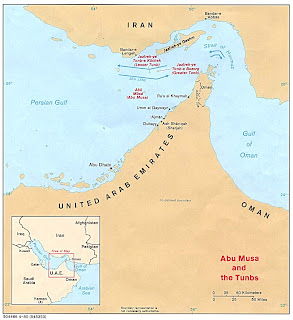 The DOE description of the Strait of Hormuz from here:

By far the world's most important oil chokepoint, the Strait consists of 2-mile wide channels for inbound and outbound tanker traffic, as well as a 2-mile wide buffer zone. Closure of the Strait of Hormuz would require use of longer alternate routes (if available) at increased transportation costs.