Let this be another warning: Iraq terrorists employ chemical weapons

The most recent use of VBIED mixed with chlorine as terrorist tool in Iraq reported here:

The attacks came after back-to-back bombings last month released chlorine gas, prompting the U.S. military to warn that insurgents are adopting new tactics in a campaign to spread panic.
***
The military also said last month that they found a car bomb factory near Fallujah with about 65 propane tanks and ordinary chemicals it believed the insurgents were going to try to mix with explosives. Maj. Gen. William Caldwell, the chief U.S. military spokesman, called it a "crude attempt to raise the terror level."

Use of chlorine gas in WWI described here:

Chlorine gas destroyed the respiratory organs of its victims and this led to a slow death by asphyxiation. One nurse described the death of one soldier who had been in the trenches during a chlorine gas attack. “He was sitting on the bed, fighting for breath, his lips plum coloured. He was a magnificent young Canadian past all hope in the asphyxia of chlorine. I shall never forget the look in his eyes as he turned to me and gasped: I can’t die! Is it possible that nothing can be done for me?” It was a horrible death, but as hard as they tried, doctors were unable to find a way of successfully treating chlorine gas poisoning.

Chlorine (Cl2) is among the ten highest volume chemicals manufactured in the United States. It is produced commercially by electrolysis of sodium chloride brine. Chlorine is used in industry and in household cleaning products. Chlorine was also the first poison gas to be used as a weapon during World War I.

Some of the chemical/physical properties of chlorine include:

* Chlorine is a yellow-green gas at room temperature.
* Chlorine has a pungent, irritating odor similar to bleach that is detectable at low concentrations.
* The density of chlorine gas is approximately 2.5 times greater than air, which will cause it to initially remain near the ground in areas with little air movement.
* Chlorine is not flammable, but may react explosively or form explosive compounds with many common substances (including acetylene, ether, turpentine, ammonia, natural gas, hydrogen, and finely divided metals).
* Chlorine is slightly water soluble, and reacts with moisture to form hypochlorous acid (HClO) and hydrochloric acid (HCl).
* Chlorine is commonly pressurized and cooled for storage and shipment as an amber-colored liquid.

International Herald Tribune offers up some suggestions for the terrorists:

Despite fears over the new tactic, some experts note the insurgents so far are not expert at it, meaning they may be causing widespread fear but not mass casualties.

Steve Kornguth, director of the biological and chemical defense program at the University of Texas in Austin, said the Iraq explosions are not "chlorine bombs."

"They are putting canisters of chlorine on trucks with bombs, which then puncture the canisters and release the chemical," Kornguth said. "But it hasn't been very effective because the high temperature created by the bombs oxidizes the chemical, making it less dangerous. "

Instead of dispersing chlorine gas — which causes death by inhalation — the heat from the explosion can render the gas nontoxic, Kornguth said.
***
Chlorine marked the first use of chemical weapons in history, when the German military unleashed the gas at Ypres, Belgium in 1915. It caused panic among soldiers unprepared for gas war.

Overall, chemical poisons killed tens of thousands of soldiers in World War I, but the poisons were not considered effective militarily because clouds often drifted back toward the attackers.

Their use caused so much international revulsion, however, that the issue sparked the Geneva Protocol of 1925, which banned the use of chemical weapons.

In general, chlorine is inefficient as a weapon — it produces a visible greenish cloud and a strong odor, making it easy to detect. Because it is water-soluble, simply covering the mouth and nose with a damp cloth can reduce the effect of the gas.

"The countermeasures are so easy and we've known about them since World War I. ... But the Iraqi civilians in general aren't prepared," said Jeremy Shapiro of the Brookings Institution Foreign Policy Studies Program.
*** 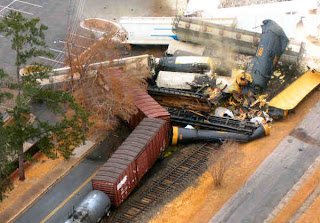 In 2005, a freight train veered off a track near a small town in South Carolina, rear-ending a parked train and rupturing a car carrying chlorine. The poisonous cloud killed nine people and injured 250.

Sanitation of the Accident of a Tank Truck, carrying Hazardous Material, Chlorine

More on Haz-Mat and chlorine here: 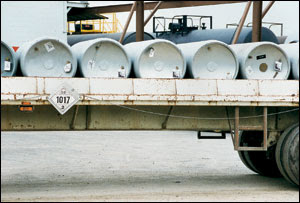 Chlorine is a common hazardous material found in most communities in the United States as a gas or in compound with other chemicals that can release the chlorine when in contact with water or other chemicals. It is generally transported and stored as a liquefied compressed gas and will be found in 100- to 150-pound cylinders, one-ton containers and railroad cars.

UPDATE: Geneva Protocol banning use of gas, "PROTOCOL FOR THE PROHIBITION OF THE USE IN WAR OF ASPHYXIATING, POISONOUS OR OTHER GASES, AND OF BACTERIOLOGICAL METHODS OF WARFARE" here. Of course, I question whether those who argue that the Geneva Conventions apply to the U.S. in fighting terrorists will argue the reverse.

b. United States Reservation to the Geneva Protocol of 1925. [T]he said Protocol shall cease to be binding on the government of the United States with respect to the use in war of asphyxiating, poisonous or other gases, and of all analogous liquids, materials, or devices, in regard to an enemy State or any of its allies fails to respect the prohibitions laid down in the Protocol.

What started as innocent, peaceful, and even humanitarian products has led to the horrors of chemical, nerve, and germ warfare. Fritz Haber, the scientist who developed the nitrogen process, was the director of the Kaiser Wilhelm Institute and a senior chemist of BASF in the I. G. Farben. He was in charge of shifting from fertilizer to gunpowder production, which gave him access to the German General Staff, a relationship he used to convince the German leaders of the value of chemical weapons. Haber developed chlorine gas as a weapon then improved upon it with phosgene, and finally mustard gas. Mustard was the most effective chemical agent used in World War I. It produced eight times the casualties of all other German chemicals and no effective defense was developed against it.

In early April 1915 the French XX Corps had been withdrawn from the line near Ypres and replaced by 17 companies of African colonials and two battalions of the 45th Algerian Zouave Division. Belgium and Canadian units flanked them. Across the mud of no man's land were German troops that had waited, in classic trench warfare routine, through weeks of inactivity.

A little civilian in a dark double-breasted suit, tie, high stiff collar, and homburg had been busy supervising the positioning of 6,000 cylinders of pressurized liquid chlorine in the German trenches across a 4-mile front. One hundred sixty tons of the chemical were in position. Haber personally supervised the preparations for what would be the largest employment of chemical warfare in history. After a two-week wait, the wind was just right and on 22 April 1915, Haber signaled the release of his gas. A sickly green cloud 5 feet high hugged the ground and moved toward the French line. The African and Zouave troops broke and ran, but not fast enough. Blindness and burning eyes, asphyxiation and choking, throats stripped raw of mucous membrane, bloody lungs, death, screams of pain, and panic seized the French colonials. Early estimates reported 5,000 dead and 15,000 wounded; later estimates were perhaps 350 dead of 7,000 total casualties. The Encyclopedia Britannica says of this battle, "the casualties were generally not severe, with relatively few fatalities."

With a 4-mile wide hole in the Allied line, the way was clear to the channel ports for the Germans. In fact, the reason Haber had insisted on such a grand-scale first use of his poison gas was to cause a surprising large opening and a quick victory for Germany before the Allies could recover from the gas attack or retaliate. Haber's idea may have been sound, but the German generals had been skeptical. Although German troops moved forward through the Allied lines following the gas attack, there were no reserves in position to exploit the breakthrough. The German troops stopped at dusk and were driven back the following morning by an Allied counterattack.

UPDATE3: Bill Roggio has more on the attacks in Iraq:

While the attacks haven't been claimed by al Qaeda, the attacks show the hallmarks of an al Qaeda operation. The attacks were carried out within hours of each other, used methods designed to cause mass casualties and mass media attention, and targeted a tribal leader opposed to al Qaeda's operations in the region.