India to use UAVs for Andaman islands patrols 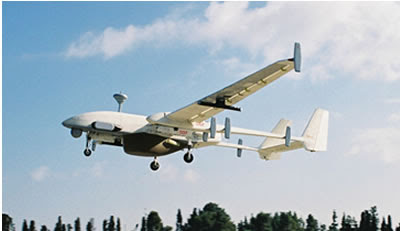 According to Strategy Page, the Indian concept of how to cover the vast territory around its Andaman islands territory (see here) involves UAVs as set out in Indian Robots Rule the Seas:

Maritime patrol is a job that consists of many hours in the air looking for whatever among not much. Boring as hell for humans, but ideal work for robots. While the U.S. is experimenting with the large, and expensive, Global Hawk UAV, Israel (which really only has to worry about coastal patrols) developed a new version of the old Heron, called the Mahatz I. One thing that makes UAVs for maritime patrol possible, or at least practical, is cheaper and more capable sensors. In the case of the Mahatz I, the radar used (synthetic aperture radar), works with onboard software to provide automatic detection, classification and tracking of what is down there. Human operators ashore, or on a ship or in an aircraft, are alerted if they want to double check with video cameras on the UAV. Also carried are sensors that track the sea state (how choppy it is). For this kind of work, one of the most important things is reliability. While the Mahatz I is a bit smaller (at 1.2 tons) than the Predator, it is still pretty expensive (over $5 million each.) You don't want to lose them over open water. The Mahatz I can stay up for 52 hours at a time, although to provide plenty of margin for error, the usually patrol will be about 35 hours, cruising at about 200 kilometers an hour. The Andaman chain is nearly 500 kilometers long, so UAVs can patrol it, and adjacent waters, rather easily. India has become a pioneer in UAV use for maritime reconnaissance, and their experience will be observed closely by other naval powers.

Strategy Page on the Israeli maritime patrol and from the UAV Blog. And a news story about the Indian UAV squadron.

UPDATE: More on Maritime Surveillence UAVs from Canada (calls them "Uninhabited Aerial Vehicles") including tests of the Eagle-1!

In line with the USN’s Sea Power 21 philosophy, the Multi-mission Maritime Aircraft (MMA) programme is adopting a bottom-up architecture, which will tailor integration of its onboard mission suite with UAVs and satellite-based systems and sensors. The platform will exceed its predecessor’s ASW, maritime strike, and ISR capability through the incorporation of evolving network, sensor, and communications capabilities. MMA is intended to ensure battle force access across the broad littoral and play a critical role in the Navy’s ability to project power ashore.

MMA will be developed in conjunction with the USN’s Broad Area Maritime Surveillance (BAMS) UAV, which is intended to provide a high-altitude persistent ISR capability that will function as an enabling force element for the fleet commander. BAMS UAV will enter service before MMA and is intended to fill a current capability gap in ISR.

Although initially control of BAMS UAV sensors will be via the Tactical Support Centre (TSC) ashore, or from the CVN afloat, MMA will have the ability to control BAMS UAV, thereby extending its own area of coverage. US DoD analysis has concluded that a mix of manned and unmanned aircraft is the best option to fulfil the USN’s projected requirements.

In the UK, the delay to the Nimrod MRA4 programme has provided the opportunity to introduce several capability enhancements to cater for those requirements not envisaged during its conception. GMTI and improved swath SAR for the radar, incorporation of intelligence dissemination tools, and increased datalink capabilities will enhance the MRA4’s ability to integrate into the ISTAR (ISR in US, RSTA in NATO) community. Multistatic active acoustic sensors will be incorporated to increase ASW capabilities and the ability to control maritime UAV sensors is also being examined.

Broad Area Maritime Surveillance (BAMS) UAV
The FY 2005 Budget requests $113.4 million for development
of the BAMS UAV. The BAMS UAV program will meet the Navy
requirement for a persistent intelligence, surveillance and
reconnaissance (ISR) capability as well as address the growing
ISR gap and the shortfall in maritime surveillance capability.
The BAMS UAV System will be a force multiplier for the Fleet
Commander, enhancing situational awareness of the battle-space
and shortening the sensor-to-shooter kill chain. BAMS UAV will
work as an adjunct to the new MMA to provide a more affordable,
effective and supportable maritime ISR option than current ISR
aircraft provide. The BAMS UAV System is intended to be a Navy
fleet asset for tactical users such as the ESG, the CSG and the
Joint Forces Maritime Component Commander (JFMCC). 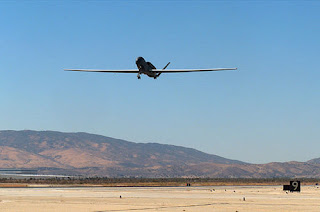 with worldwide access. The Broad Area Maritime Surveillance UAV will be a multi-mission ISR system to support strike, signals intelligence, and communications relay while operating independently or in direct collaboration with other assets in the maritime environment. BAMS will operate at altitudes over 40,000 feet, above the weather and most air traffic to conduct continuous open-ocean and littoral surveillance of targets as small as exposed submarine periscopes. BAMS will be fully integrated into the joint ISR architecture, providing this information to the joint force in near real time. Long-endurance BAMS UAVs will be able to provide a continuous on-station presence at ranges of 1000-3000 nautical miles from the launch point. BAMS will thus play a key role in providing the commander with a persistent, reliable picture of surface threats while minimizing the need to put manned assets in harms way to execute surveillance and reconnaissance tasks.

BAMS will be complemented by the Maritime Multi-Mission Aircraft (MMA) for special purpose, generally lower-altitude missions and by the VTUAV operating from LCS to ID contacts with EO/IR sensors. The Navy's Broad Area Maritime Surveillance (BAMS) UAV will address a persistent Maritime Intelligence, Surveillance, and Reconnaissance (ISR) mission area of the Naval UAV Strategy. 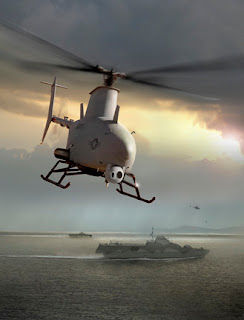