Someone in India is worried about protecting their sea lanes 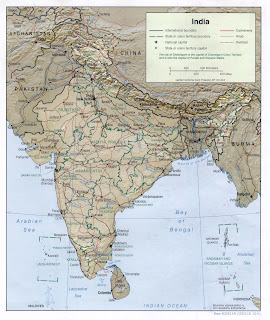 With Chinese footprints in the international waters around India growing at a rapid pace, coupled with the ever-increasing threats posed by terrorists, pirates and drug smugglers, New Delhi needs to fast-track its plans to bolster the military infrastructure and force-levels in the strategically-located Andaman and Nicobar Islands.

The military build-up in the archipelago will not only counter covert and overt Chinese moves in the region but also go a long way in ensuring the security of the sea lanes converging towards the Malacca Strait, one of the world's busiest shipping lanes with around 70,000 ships sailing through it every year.

Moreover, it will also provide a strong security cover to India's 600,000 sq km of Exclusive Economic Zone (EEZ) spread out in this region, which is around 30% of India's total EEZ of 2.01 million sq km. This becomes all the important since it is expected that the energy exploration blocs in the region will lead to huge gas finds in the years to come.
***
Though sources say there are plans to eventually base a division-level force (around 15,000 troops), a fighter squadron and some major warships here after increasing the support and maintenance infrastructure in the 572-island cluster, the going has been slow.

Apart from the two main runways at Port Blair and Car Nicobar and airstrips at Diglipur and Campbell Bay, moves are finally afoot to construct more airstrips at Kamorta and Little Andaman.

"Even the IAF chief recently said this is the place where the future action will take place. There are plans to include fighters, bigger ships and more Army troops here but we are developing ANC in bits and pieces," said ANC chief Air Marshal P P Raj Kumar, ahead of defence minister A K Antony's first visit to the islands on Saturday.

While Indian Jaguars, Sukhoi-30MKIs and other fighter jets, as also large destroyers and frigates, often operate in the region as part of training exercises, India should ensure that at least some major military assets are permanently based in these islands, which are as far as 1,200 km from the country's eastern coast.

In sharp contrast, Myanmar's Coco Islands, where the Chinese have some presence, are barely 42 km away towards the north. Indonesia, Malaysia and other countries are also much closer to the islands than the Indian mainland.

"The response time from the mainland to threats in this area will obviously be slow. It makes prudent sense to boost force-levels here to protect India's geo-political and economic interests. ANC, after all, is the last military outpost of India," said a senior officer.

UPDATE: More here. Earlier posts on Indian base on Nicobar here. And here. And more info on Chinese presence on Coco Island here.