Don't fall for the hype: GAO study of LNG terror threat not complete 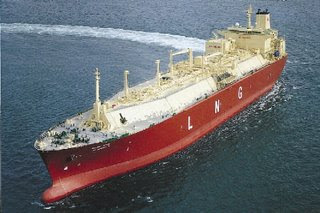 As set out here, and contrary to the headlines proclaiming LNG as the devil's tool sample Boston Herald headline, "LNG tanker attack seen as catastrophe") - what the GAO really said was, "we need more information."

The GAO has issued a report saying that the "public safety consequences" of a terrorist attack on an LNG tanker "need clarification."

The report was released yesterday by the House Committee on Energy and Commerce, which is planning to hold hearings.

The report has already been seized on by opponents of LNG terminals and generated one Massachusetts headline proclaiming: "Reports say terror attack could burn people one mile away."

What does the report, in fact, say?

As the article says, download it here (get the full pdf) and read it for yourself.

From page 12 of the report:

Specifically, all experts did not agree with the heat impact distance of 1,600 meters. Seven of 15 experts thought Sandia’s distance was “about right,” and the remaining eight experts were evenly split as to whether the distance was “too conservative” or “not conservative enough” (the other 4 experts did not answer this question). Experts also did not agree with the Sandia National Laboratories’ conclusion that only three of the five LNG tanks on a tanker would be involved in a cascading failure. Finally, experts suggested priorities to guide future research aimed at clarifying uncertainties about heat impact distances and cascading failure, including large-scale fire experiments, large-scale LNG spill experiments on water, the potential for cascading failure of multiple LNG tanks, and improved modeling techniques. DOE’s recently funded study involving large-scale LNG fire experiments addresses some, but not all, of the research priorities identified by the expert panel.