Twice in its history the U.S faced a steel shortage that prompted it to experiment with alternative materials for ship building, including concrete. A number of merchant hulls were bulit for use during WWI, though the war ended before the ships coud be used for wartime logistics purposes.

President Woodrow Wilson finally approved the Emergency Fleet program which oversaw the construction of 24 concrete ships for the war. However, only 12 were under construction and none of them had been completed by the time the war ended. The 12 ships were completed and sold to private companies who used them for light-trading, storage and scrap.

Again, at the start of WWII, some ships and other craft were designed and built with concrete. This time, however, these vessels went to war. Some are still providing useful service.

As set out here, the design of concrete ships during WWI had some challenges:

The concrete ships that were built followed the design of steel ships of that era, but required much thicker hulls to get the same amount of strength that the steel gave. A newly-developed form of concrete that included portland cement was used because it was relatively light (Only 120 pounds per cubic foot). Even so, the ships were much heavier than steel ships. The ship builders also found that concrete was much more difficult to manipulate than steel, making the ships more difficult to construct.

The first of these ships finished was the Polias which was launched from the Liberty Company Shipyard of Wilmington, North Carolina in 1918. It was 250 feet long with a draft of 22 feet and a beam of 45 feet. The walls of the hull were six inches thick. She required only one-third of the steel necessary for a regular freighter.

While these ships actually worked, many sailors referred to them as "floating tombstones" and did not like to serve on them. Still, some of them were used to transport troops back from Europe at the end of the first World War. Soon after the war when steel was more abundant, the concrete ships quickly became too expensive to operate. Their heavy hulls needed too much fuel to push them around and the ships became obsolete. One was turned into a casino, and another a restaurant.

In 1942, the United States Maritime Commission contracted McCloskey and Company of Philadelphia, Pennsylvania to build a new fleet of 24 concrete ships. Three decades of improvements in concrete technology made this new fleet lighter and stronger than its WWI predecessors.

Two of the ships were sunk as blockships in the Allied invasion of Normandy. Nine more were sunk as breakwaters for a ferry landing at Kiptopeke, Virginia. Two are wharves in Yaquina Bay in Newport, Oregon and seven are still afloat in a giant breakwater on the Powell River in Canada.

The collection of concrete vessels included:

As noted above, two of the concrete ships took part in the Normandy D-Day invasion, where they were sunk to form part of a breakwater (known as a "Gooseberry").

A sailor's tale of serving in one of those ships here:

On D-Day+1 we tried to maneuver to our assigned position, but German 88s started exploding around us. We got out of there just in time. We tried again on D-Day+3 with the same results. On D-Day+4 we went in without any problem. We got off the ship into an LCI, and watched Army Engineers set off the dynamite. A big puff of smoke, and she sank quickly in the shallow water with about half the ship still showing.

Concrete vessels also served in the Pacific, including an unusual barge:

In 1945, the Navy commissioned the worlds first "floating ice cream parlor" for service in the Western Pacific. The parlor was a concrete barge, built at a cost of over one million dollars, that was capable of producing ten gallons of ice cream every seven seconds.

In addition to the ice cream barge, concrete barges served other purposes:

The concrete IX's Trefoil and Quartz were used to issue general stores at Eniwetok, maintaining continuous supplies at the anchorage while one or more of the general issue ships retired to their source of supply for refilling.

More on the Trefoil class here. Some of the barges looked like ships (see the photo of Quartz above), but lacked propulsion machinery. This caused problems in heavy weather, as recounted here:

We were being towed in company with some other ships and were caught by a typhoon. The first night of the typhoon we broke the tow. I was on deck at the time, looked to starboard, and wondered what that light was. "That light" belonged to the tug that was towing us; the force of the typhoon was blowing us past it.
***
In the storm the crane was swept overboard; as it went, it punched a hole in the port quarter of the Feldspar. We had several crises occurring at once. The disbursing officer's safe, which was on small wheels and was supposedly secured in the office, rolled across the deck and threatened to drop into the hold that had been damaged by the crane. Several people were wrestling with it and finally got it secured, tipped on an edge and held by ropes. I was on deck working with some men trying to get our whaleboat secured. We did wonder if the ship was going to go down. We were taking on water through the hole on our port side, and were broadside to the waves that swept over our ship. When people heard that ours was a concrete ship, they normally found that hilarious. But the ship had strength enough to carry us safely through the storm.

After the typhoon ended, we drifted for a couple of days. At that point we were probably somewhere in the vicinity of Taiwan (Formosa). Why didn't we use the radio? There was no such thing aboard these ships. Finally a fleet tug, sent out to look for strays, found us and took us in tow. We started back toward the Philippines, but then the tug got orders to turn and go to Okinawa.

The net result of experience with the "concrete Navy" during WWII in the Pacific? This assessment:

Late spring of 1944 saw the first of the "crockery" ships come into Majuro. They were the Trefoil and the Quartz, large concrete barges with power plants for refrigeration, lighting, and windlass, but not for movie (sic- think they meant "motive" power). They had a capacity of 3,000 tons of general naval stores, including food, clothing, canteen, tools, material (not including heavy metal), and boatswain's stores. Later barges included ordnance items, electronics parts, and Diesel-engine spares. These barges were extremely useful, since they came at a time when there was a shortage of hulls, but they were so fragile that a bump by a good-sized boat would crack a side. One was lost on a reef in a storm. A steel hull would have been salvaged.

Overall, the concrete ships did their job. After the war, many of the ships were converted to breakwaters, 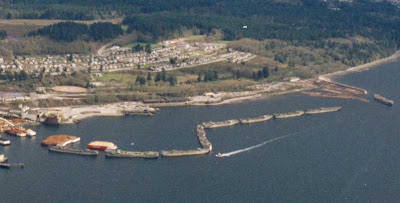 as set out here on the Powell River in Canada and here at Kiptopeke the northern end of the Chesapeake Bay Bridge Tunnel near Norfolk, Va. 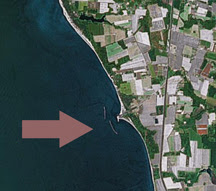 The arrow in the photo points to the breakwater at Kiptopeke.

There are also some relics from WWI around, including the Selma in Galveston Bay, Texas. The Selma is pretty well respected:

Since 1992, besides recognition with a Texas Historical Commission's Official Texas Historical Marker, she has been designated as a State Archeological Landmark by the Texas Antiquities Committee, as the Official Flagship of the Texas "Army", and is listed on the National Register of Historic Places.

No one seems to know the fate of the "ice cream barge."

Concrete is still being used in boat manufacture, especially in "ferro-cement" hulls" of yachts and other boats.,

Here's a salute to the brave men who served in the "concrete Navy."