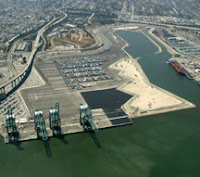 As set out here,

The port complex of Los Angeles-Long Beach is the gateway for 70 percent of US imports and to accommodate the more than 40 million TEUs cascading into its terminals in a few years, the ports must expand both capacity and productivity. Rail operators will also be required to invest heavily in infrastructure, although they have already said there will be no investment without guaranteed returns.
Handling more containers per acre is being addressed with some urgency, but it is unlikely the ports along the West Coast of North America will achieve the moves found routinely at Asia terminals any time soon.
Extensive and lengthy environmental deliberations and impact assessments are another delaying factor in the expansion of port capacity. LA-Long Beach may be the US gateway, but it has the most enlightened green regulations in the world and the people in the sprawling city are the immediate beneficiaries.
An admirable achievement, but what about trade? China will increase the number of containers being exported through its terminals by 42 percent to 160 million boxes in three years. We reckon about 35 million of those TEUs will steam across the Pacific Ocean bound for Southern California.
Intermodal shortcomings will keep the pipeline choked. To have any hope of getting their products into the US and on to shelves, shippers will simply have to spread their cargo flows throughout the year.
We predict the traditional peak season on both the transpacific and Asia-Europe will disappear under a flood of traffic all year round. Inventories will increase as Christmas goods are imported early to avoid delays and supply chain costs will rise.
We understand that many US cargo owners have already revised their outsourcing strategies and dusted off old Mexico plans, and this probably explains why Mexican port authorities have been showing up regularly at recent port conferences. Mexico's Pacific ports recorded container-handling growth of 42 percent in 2006, mainly through Manzanillo.

So, an inability to expand efficiently and realize economies of scale, will cause a level of inefficiency that will result in greater expenses to shippers and buyers in the distribution chain, ultimately resulting in higher prices to the consumer and likely in more total pollution than if the Port of LA-Long Beach were allowed to expand...added to which will be the loss of jobs that could have been grown in the U.S.

Where is the agency of government planning that ought to be taking the long view of such matters?
Posted by Mark Tempest at 3/21/2007 09:50:00 AM