Twelve cars were burning but no one was injured.

The 80-car train derailed on the outskirts of the city, where several hundred people and including some schools were evacuated, said Lt. Kevin Salerno of the Oneida Fire Department.
***
The twelve cars, which appeared to be propane tankers, were still burning about two hours after the accident, but the flames had been reduced, according to Salerno.

More news here, from whence the picture was liberated.

High profile terrorist attacks on rail systems in Madrid, London, and Mumbai provide troubling illustration to persistent warnings that the U.S. public transportation system is a vulnerable target for terrorists. But passenger rail is not the only, and perhaps not even the gravest concern. Much of the 160,000 miles of railroad track in the United States transports freight, including highly toxic chemicals. These shipments often have minimal security, even though they pass through populated areas, endangering thousands of lives. 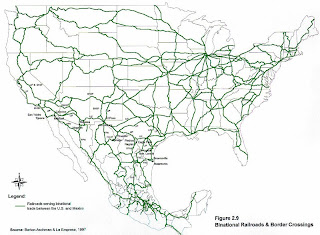 Just for fun, take a look at the map, which shows "binational" railroads (those "Serving binational trade between the U.S. and Mexico."). Think about how many more lines there are...
(you can look at a map of U.S. railroads by going here and clicking on the map below the headline "2004 Edition! Railroads of the Continental United States")
Posted by Mark Tempest at 3/12/2007 04:48:00 PM