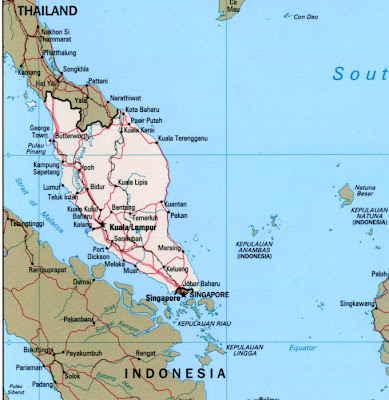 From a speech by the Deputy Prime Minister of Indonesia found here:

Located between Malaysia, Indonesia and Singapore, the Malacca strait is one of the most important shipping lanes in the world, and one of the most endangered. About 60 thousand ships, carrying half the world's oil and more than a third of its economy, pass it every year. This makes it one of the most important shipping lanes in the whole world, equivalent in its importance to the Suez or Panama Canal.
***
The strait's economic importance drew the attention of a threat, which seemed long forgotten in marine history: piracy. A threat which grew so eminent, that the Lloyd Market's Association (an insurance company) declared the Malacca Straits an area that is in jeopardy of "war, strikes, terrorism and related perils" in 2005. The LMA revoked this decision later in August 2006. Nevertheless, in 2004, from all the piracy crimes worldwide, 40 percent were committed in this area.

After the 9/11 attacks on World Trade Centre, another frightening scenario rose in the heads of analysts. A terror attack in this area could critically wound one of world trade's most important veins, leading to an economic collapse in this region.

If terrorists would sink a ship at the most shallow part of the strait, no ship could pass through and the whole traffic would be blocked. Fears rose, when video footage of Malaysian police patrols along the Malacca Straits, appeared on the al-Qaeda network, suggesting there was already a plan in progress.

"After 9/11 we were worried about a connection between pirates and al-Qaeda. But we are tracking this very closely and I can assure you that there is no evidence for such a case so far," the deputy prime minister ensured the audience.