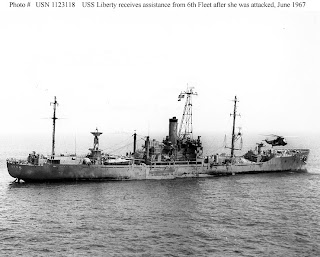 A somewhat belated follow-on to a previous post regarding the attack June 8, 1967 attack on USS Liberty (AGTR-5) following its 40th anniversary can be found in a piece titled Why You Shouldn't Pay Attention to the Claims that Israel Attacked the USS Liberty Deliberately by U.S. Bankruptcy Judge A. Jay Cristol, who has conducted an extensive investigation into the matter, part of which can be viewed here.

In case you are wondering, Judge Cristol thinks the attack was a tragic mistake. Some other opinions can be found at the first link above. UPDATE: And here.
Posted by Mark Tempest at 6/12/2007 01:12:00 PM