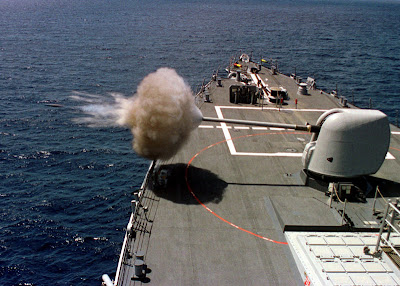 A U.S. warship pounded Somalia's remote coastal northeast, targeting Islamic militants hours after a gunbattle with Somali government forces that left eight insurgents dead, officials said yesterday.
The fighting late Friday, which the provincial government said included an American militant, appeared to mark the opening of a new front against Islamic militants in Puntland, a semiautonomous region that has remained relatively peaceful through Somalia's anarchy.
The government declared victory in April against insurgents in the Somali capital, which is in the south. Since then officials of the government and Ethiopian troops sent to prop it up have been targeted in bomb attacks.
Puntland Vice President Hassan Dahir Mohamoud said that eight foreign militants were killed in the fighting and that Somali forces were pursuing five others. He said there were no civilian casualties because the area is uninhabited.
Mr. Mohamoud said the Puntland government had requested the U.S. Navy to help fight the militants.
He said that the government knew the home nations of five of the foreign militants: the United States, Britain, Sweden, Eritrea and Yemen. He said security forces identified them from their passports.
"We have successfully completed the operation against the terrorists who came here, and we are chasing the other five," said Mr. Mohamoud, speaking from Puntland's capital, Garowe. He said the total number of militants was 13; government officials earlier reported as many as 35.
Muse Gelle, a regional governor, said the militants arrived in the area near the port town of Bargal by speedboat on Wednesday. He said a U.S. destroyer attacked late Friday.

UPDATE (6/4/07): More "facts" here, though the article contends "cruise missiles" were used in the attack:

Somali officials confirmed on Sunday that an American was among the suspected Muslim radicals killed on Friday when a U.S. Navy warship fired missiles at a militant encampment in northern Somalia.

The American was not identified, but Hassan Dahir Mohamoud, the vice president of Puntland, the northern Somali region that declared itself semiautonomous in 1998, said that the American's passport had been recovered.

''We have found an American, British, Swedish and some Middle Eastern passports on the corpses,'' Mohamoud said.

The presence of at least six foreigners among what officials now estimate was a group of perhaps a dozen men who arrived by boat in Puntland on Wednesday night raises questions about who the men were and what their purpose was.
***
They said the group came ashore on Wednesday night and was apparently traveling by fishing boat to the tiny coastal nation of Eritrea, where top leaders of Somalia's former Islamist regime are believed to be hiding.

On Friday, the suspected militants came under fire from Puntland security forces, who then alerted the American military base in neighboring Djibouti. After the security forces chased the group up a brushy mountain, a U.S. Navy destroyer floating in the Red Sea fired cruise missiles at their location.

It was unclear if the militants included any of three al Qaeda suspects U.S. officials are seeking in connection with the 1998 bombings of U.S. embassies in Kenya and Tanzania who are believed to be hiding in Somalia.

The clashes in Puntland were the first in the north of the country, which has largely escaped Somalia's recent violence. Somali officials pledged to continue to seek American help to root out other militants.

''The American airstrike follows a series of attacks targeting any terrorist group in every hideout,'' said Mohammud Ali Yusuf, Puntland's finance minister. ``We want any help from the U.S. without harming innocent people.''