Border insecuirty in the U.S. Virgins? 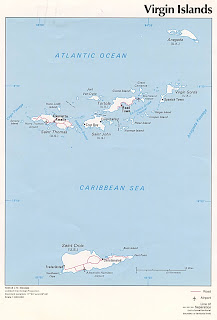 A cost-saving effort that could backfire...reported here:

The U.S. Virgin Islands have long been known as a convenient Caribbean paradise, boasting sandy beaches, palm trees and sunshine -- and no passport requirement for American citizens.

But that convenience is also making the Virgin Islands a conduit through which illegal immigrants, and possibly terrorists, are finding their way onto U.S. soil, according to law enforcement and government officials.

"It's a good way to enter the United States," said former Immigrations and Customs Enforcement (ICE) agent Mike Cutler. "If you can get yourself to the Virgin Islands, you're in the United States ... the likelihood is no one is going to even look at you, you just show a driver's license, get on the airplane, and you're on the way."

At one point, the U.S. Virgin Islands (USVI) are separated from the British Virgin Islands by just four miles of open water. It's also one of the busiest cruise ship destinations in the world. Yet U.S. Customs and Border Protection (CBP) has told USVI officials not to expect any additional help anytime soon.

***
In a report to Congress, CBP officials note they are not planning to "establish a Border Patrol Station in the U.S. Virgin Islands," despite repeated requests from Christian-Christensen and a public plea by the island's police commissioner.

CBP officials say the justification is simple: There aren't enough illegal immigrants moving through the USVI to warrant devoting resources to the islands, and there hasn't been any specific terrorist threat for the USVI.

The CBP report does note, however, "potential vulnerabilities for exploitation by terrorist groups may exist in this or any part of the border, [but] none of the available assessments reviewed suggest ... the area is being exploited as an entry point for terrorist activities."