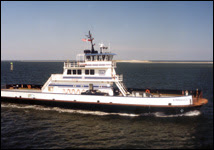 The reason we are all here and the reason we are pleased to have you here is so that we can have a conversation about what we can do collectively as part of federal, state and local government, as part of the private sector, as the owners and operators of small boat vessels, to better understand the security risks that are associated with small vessels, and to talk about the steps we can take to reduce that risk across the maritime domain, as we continue to protect our nation against the threat of terrorism.

At the same time that we see the potential threat in small vessels, we recognize that you are also a very powerful asset, because you are the eyes and ears on the water, millions of eyes and ears that give us visibility and situational awareness about potential threats, threats that, by the way, would directly affect your livelihood as well as the welfare of this country.

So your safe operations and your continued operations are actually contributors to maritime security.
***
And this issue of dealing with security in the maritime domain is a particular challenge because of the number of vessels that we have on the waters. Over 17 million of these small vessels operate on our waterways. And they range from significant commercial enterprises to passenger ferries, to personal watercraft that are small and only carry a few people.

We also recognize that small vessels are not subject to the same kind of security regulations that apply to larger vessels under the Maritime Transportation Security Act or the International Ship and Port Facilities Security Code. Indeed, currently, small vessel regulations are almost exclusively focused on safety rather than security.

The protective measures required for larger vessels, like automatic identification systems and vessel security plans, which do make sense for large vessels, are not necessarily suited for smaller vessels that are less than 300 gross tons. 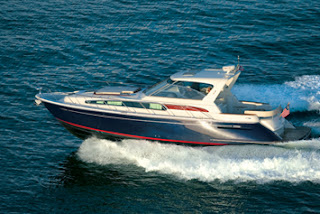 And we want to make sure we implement our security measures and protocols in the area of small vessels in a way that doesn't fundamentally impair the commercial livelihood and the sheer pleasure of taking small boats out on the waterways and the seas that surround this country.

So this summit is an opportunity for all of us to come together, working in a spirit of collaboration and shared responsibility, to talk about what we can do to enhance protection and develop workable solutions over the short term and the long term.

So as we embark on this discussion, let's talk very specifically about what we're worried about. Well, first and foremost, we're concerned about the use of a small vessel as a conveyance to smuggle weapons, including a weapon of mass destruction, into the United States. Such a weapon could have a devastating consequence for this country.

Now, you know, we've had a lot of discussion about smuggling of weapons of mass destruction over the past couple of years, and there's been a lot of focus on the danger of smuggling a weapon of mass destruction through the maritime domain, but what's been a little bit remarkable to me is, virtually all of this public discussion has occurred in the context of our ports and the concern that someone might put a nuclear device or a dirty bomb or something similar in a container, and that that container might be used to smuggle that bomb into our ports.

And there's no question that that is a real thing to be concerned about. That's why we've invested very heavily in radiation detection equipment. We're going to have almost all of the containers that come into this country, into our seaports, scanned by radiation detection equipment by the end of this calendar year. That's why we're working very hard to gather information so we can target containers and know which ones need to be inspected.

But I have to tell you that if all we do is worry about containers, it's as if we're locking the front door and we're kicking the back door wide open. Because there's also a concern that we have that someone might seek to smuggle a weapon of mass destruction into a seaport or between the seaports, not using a container, but using a commercial vessel, including a vessel that is below 300 gross tons.

So if we're going to take this issue of maritime safety and security seriously, we can't only look at containers. We have to look at the whole range of methods in which someone might smuggle that weapon of mass destruction into the country.

By the way, if you have any doubt about the availability of such vessels for smuggling, I suspect – I suggest you ask yourself how a lot of the drugs that get into this country get smuggled in, because a lot of it does come through the maritime domain, and that's a cautionary fact for us to consider, because we have to worry about things in addition to drugs coming in through the same method.

Apart from the issue of smuggling dangerous items, and we have to also be considering the use of a vessel as being in and of itself a weapon, an improvised explosive device that is waterborne as opposed to land borne in the way we typically see land borne vehicles being used as IEDs in Iraq and other parts of the world.
***
want to underscore, we're here, and we've asked you to come here precisely because we don't believe that wisdom emanates from Washington across the country. We think that wisdom is involved in the collection of your experience and your knowledge so that we can integrate it and work with you collaboratively to disseminate it across this entire country.

I appreciate the time you've taken from your everyday pursuits to attend this summit, to share your thoughts, and to help us take this first very important step in improving security with respect to our smaller vessels and smaller boats.

You're our partners. We have a common interest both economic, but more important, as citizens and as people with loved ones and friends in our communities. Many of you live in ports and are near or on waterways, and therefore, your vulnerabilities are very much what we're talking about protecting. So I think we have a common interest on a personal level as well as on an economic level.

I know we've got a ways to go, and I know there are a lot of different viewpoints within this room. I think even if I were to take a survey of the various interests reflected here, I'd get probably a fair amount of disagreement, even with respect to safety matters. But nevertheless, we can't waste time beginning this discussion, and we can't waste time raising our level of security.

Because I will guarantee you one thing -- the enemy is not wasting time. The enemy is spending every day figuring out how they can get in here and how they can cause damage to us, and again, looking at their track record, because they do tend to return to successful plots. 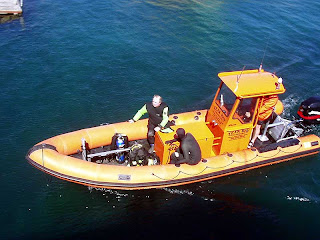 Read it all, including the limited number of questions from the audience and the limited responses provided by the Secretary who is delegating the details of how to make a rather massive system work for our protection to the Coast Guard and other agencies under his purview, as he should.
Posted by Mark Tempest at 6/20/2007 01:02:00 PM