Memorandum from the President on Maritime Security (Piracy) Policy 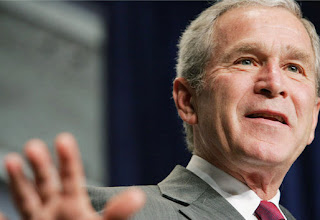 President Bush has issued a memorandum on piracy at sea at Memorandum from the President:

The attached Policy for the Repression of Piracy and Other Criminal Acts of Violence at Sea (Piracy Policy) is approved for immediate implementation, consistent with applicable law and subject to the availability of appropriations. The policy shall be appended to the National Strategy for Maritime Security as Annex B.

This policy responds to the emergence of high-risk maritime areas that threaten U.S. interests. Recent instances of piracy have highlighted the need for this policy in order to coordinate U.S. Government response and to promote international solutions. This policy advances our commitment to cooperate with other states, regional and international organizations, and the maritime industry in order to counter this threat. The United States has long been a leader in the protection of navigational rights and freedoms. Our objectives consistently have been to promote and facilitate peaceful international uses of the oceans. We recognize that all nations have an interest and responsibility in protecting those rights and freedoms.

This document establishes United States Government policy and implementation actions to cooperate with other states and international and regional organizations in the repression of piracy and other criminal acts of violence against maritime navigation.[1]

Piracy is any illegal act of violence, detention, or depredation committed for private ends by the crew, or the passengers, of a private ship and directed against a ship, aircraft, persons, or property on the high seas or in any other place outside the jurisdiction of any state. Piracy also includes inciting or facilitating an act of piracy, and any act of voluntary participation in the operation of a ship with knowledge of facts making it a pirate ship. Piracy is a universal crime, and all states are obligated to cooperate to the fullest possible extent in the repression of piracy.[2]

Piracy threatens U.S. national security interests and the freedom and safety of maritime navigation throughout the world, undermines economic security, and contributes to the destabilization of weak or failed state governance. The combination of illicit activity and violence at sea might also be associated with other maritime challenges, including illegal, unlawful, and unregulated fishing, international smuggling, and terrorism.

The policy set forth in this annex fosters both increased interagency coordination and international cooperation and is consistent with, supports, and builds upon existing maritime security efforts for piracy repression.

The United States strongly supports efforts to repress piracy and other criminal acts of violence against maritime navigation. The physical and economic security of the United States -- a major global trading nation with interests across the maritime spectrum -- relies heavily on the secure navigation of the world’s oceans for unhindered legitimate commerce by its citizens and its partners. Piracy and other acts of violence against maritime navigation endanger sea lines of communication, interfere with freedom of navigation and the free flow of commerce, and undermine regional stability.

Piracy endangers maritime interests on a global scale, and the responsibility for countering this threat does not belong exclusively to the United States. Consequently, the United States will engage states and international and regional organizations to develop greater resources, capacity, and authorities to repress piracy and maximize inclusion of coalition assets in piracy repression operations.

Piracy repression should include diplomatic, military, intelligence, economic, law enforcement, and judicial actions. Effectively responding to piracy and criminal activity sends an important deterrent message and requires coordination by all departments and agencies of the U.S. Government in order to ensure that those responsible are brought to justice in a timely manner.

It is the policy of the United States to repress piracy, consistent with U.S. law and international obligations, and to cooperate with other nations in repressing piracy through the following actions:

* Prevent pirate attacks and other criminal acts of violence against U.S. vessels, persons, and interests;

* Interrupt and terminate acts of piracy consistent with international law and the rights and responsibilities of coastal and flag states;

* Reduce the vulnerability of the maritime domain to such acts and exploitation when U.S. interests are directly affected;

* Ensure that those who commit acts of piracy are held accountable for their actions by facilitating the prosecution of suspected pirates and ensure that persons suspected of committing acts of violence against maritime navigation are similarly held accountable by flag and littoral states and, in appropriate cases, the United States;

* Preserve the freedom of the seas, including high seas freedoms;

* Protect sea lines of communication; and

Responses to these threats will vary according to geographic, political, and legal environments. The scope of the mission and the defined nature of the threat also will affect the choice of response.

* Incorporate this policy into the Maritime Operational Threat Response Plan (Protocols), as appropriate;

* Oversee the development of specific guidance and protocols for the prevention of and response by the United States Government to piracy and other acts of violence against the safety of maritime navigation;

* Review existing U.S. laws against or relating to piracy and prepare for consideration such amendments as may be necessary to enhance our ability to prosecute pirates in U.S. courts;[3] and

* Seek international cooperation, consistent with the International Outreach and Coordination Strategy of the National Strategy for Maritime Security, to enhance the ability of other states to repress piracy and other criminal acts of violence against maritime navigation and to support U.S. anti-piracy actions.