The Guardian seems to think so, as set out in Guns, grenades and GPS: the brutal reality of Somalia's hi-tech pirates:

The increase in attacks, particularly on vessels carrying aid for the World Food Programme, led the UN last week to call for international action. The agency's executive director, Josette Sheeran, said: "We urge key nations to do their utmost to address the plague of piracy, which is now threatening our ability to feed one million Somalis. Unless action is taken now, not only will our supply lines be cut, but also those of other aid agencies in various parts of Somalia."
***
Last month's attacks, at least 180 nautical miles from shore, mark a new strategy and confirm fears that the pirates are becoming better funded and equipped - they now use satellite phones and GPS to track their prey. That same technology allows large container ships to operate with smaller crews, making them easier to overpower.

I would guess that they might have radar, radios and other such stuff that makes ship tracking much easier.

Grab enough ships, get enough money in ransom and you can afford upgrades in equipment. It does point out one of the challenges in nabbing the Somali pirates - their communication may make it harder to pull off a surprise attack. 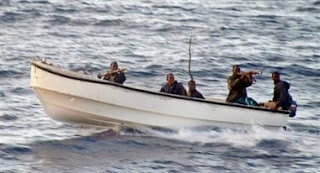 It should also be noted that the pirates have some long-term goals for larger prey:

From his own experience, Capt Perera predicts worse to come. "The lion's share of the ransom money goes to these militias. Unless they clear the area between Puntland and Mogadishu of militias, they will not be able to stop these pirates ... The pirates who took us told me they were no longer interested in small ships - their main aim is to get tankers and big container ships. They are aiming for British, American, Japanese and Korean vessels. They know that's where the money is."

Sounds like they have a piratical Willie Sutton in their midst, writing their business plan.
Posted by Mark Tempest at 6/12/2007 03:00:00 PM