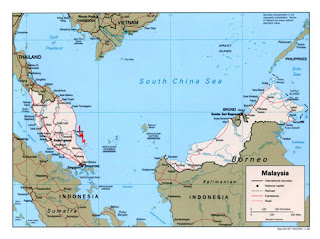 As a ship was docking, "sea robbers" climb on, as reported here:

Six Indonesians armed with parangs (machetes) and pistols sneaked on board a vessel and robbed eight crewmen of their belongings and cash, resulting in some RM25,000 worth of losses.

The ship Mujur Samudra was docking near Pulau Lima here while on its way to Vietnam at 9.45pm on Saturday when eight Indonesians arrived on a speedboat.

Six of the robbers came on board while two stayed behind.

They surprised the eight crewmen and demanded their belongings, but when two of them did not comply, the suspects hit them on their heads with their parangs.

Pulau Lima is an island off the coast of Malaysia. Lightning bolt is in general area, I believe. Note that the Malaysian press indicates the pirates were Indonesian.
Posted by Mark Tempest at 6/25/2007 10:22:00 AM