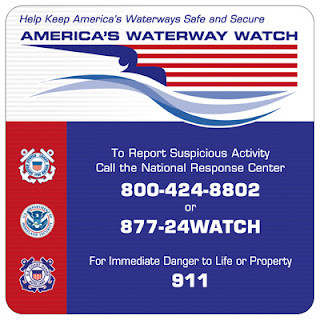 A Heritage Foundation piece by James Jay Carafano, Ph.D. Small Boats, Big Worries: Thwarting Terrorist Attacks from the Sea. Shouldn't be surprising to regular readers of this blog, but it serves as a useful "backgrounder" for those who stroll the halls of power and rely on entities like Heritage for their information.
The Coast Guard, with their Maritime Domain Awareness project, will like it. Sample:

Globally, terrorists have shown an increasing inter­est in using small boats to attack military and com­mercial shipping and maritime facilities. The tactics and techniques of using commercial or non-commer­cial vessels (under 500 tons) or swimmers to emplace or deliver improvised explosive devices have proven effective and exportable. Contemporary operational practices by transnational terrorist groups include refining proven attack methods, sharing lessons learned, and encouraging others to adopt effective tac­tics. Thus, the possibility of such attacks in U.S. waters should not be ignored.

The small-boat threat needs to be addressed, but rather than focusing on this particular terrorist tactic, Congress and the Administration should invest in assets that improve the overall security of the maritime domain. The maritime sector is a large and diverse field with unique and daunting threats. Efforts should be expanded to improve U.S. situational awareness and law enforcement response rather than fixating on specific attack scenarios involving small boats or other terrorist threats.

I know it sounds like a take off on those 1950's Sci-Fi films asking us to "watch the skies" for UFOs, but we really need to keep our eyes open for what is a real threat. Here's a pretty fair list of things to be watching (to be pplied with a modicum of common sense):

1. UNUSUAL OPERATION OF A SMALL BOAT, ACCOMPANIED BY VIDEO TAPING OR STILL PHOTOGRAPHY
You observe a boat being operated aimlessly (with no apparent destination). The boat is occupied by three young to middle-age people -- not a "family" as usually seeing cruising these waters. A little while later you see the same boat, this time with two occupants, and its movement is repetitive. It circles around bridge abutments for awhile, and makes several passes alongside a shore side power plant, moored commercial vessels, and a ferry passenger terminal. You notice that the passenger is taking still and video pictures of the facilities. Later you observe the boat picking up the third person from a public dock near the bridge. He boards the boat carrying a video camera and a notebook. These actions could indicate initial surveillance of a potential terrorist targets, or preparation for an attack, and should be reported.

2. PEOPLE TAKING STILL PHOTOGRAPHS OR VIDEO TAPING FROM THE SHORE
A white mid-sized four-door sedan pulls into a "view" area near a railway bridge; drops off two passengers, and departs. One of the passengers begins taking video pictures of the bridge and of a commuter train and a long freight train which, headed in opposite directions, pass each other on the bridge about 15 minutes later. (As a frequent and long-time marina worker, you know they do every weekday throughout the year). The second person appears to be taking notes, and occasionally glances at his left wrist as if checking a watch.

You continue down river, returning to your home marina just a quarter mile South. As you pull into the service dock, you notice what appears to be the same white sedan parked at water's edge in the marina parking lot. The driver is outside the car, and is in the process of packing a large video camera into its storage case. A few minutes later he gets into his vehicle and drives away. People photographing or video taping potential terrorist targets are engaged in activities that should be considered suspicious.

3.PERSON RUNNING
You notice a person running away from an area close to a secure facility. Some questions should come to mind: Does this person's behavior or dress indicate he is more than the usual jogger? Does he appear to be someone just in a hurry, or does his running have a heightened sense of urgency or tension about it? It would be suspicious if he were looking about furtively, as if he were concerned about being observed or pursued.

4.PERSON ENGAGED IN SURVEILLANCE
You work in a business in the immediate vicinity of a ferry terminal, and you ride the ferry to and from work everyday. One day you observe a particular person taking pictures of the shore side -- unusual for people riding the ferry during "commute time." While at work you notice the same person board a ferry to a different destination, and return a few hours later. The next day you see the same person loitering around the terminal as passengers pass through security while boarding ferries -- at one point the person joins a group lining up to board a ferry, takes some pictures, but leaves the group without boarding. During the day you see this person making two round-trip ferry rides -- once wearing a large back pack, and once carrying a oversized brief case. Over several days you notice the same person engaged in varied activity, at different times, all in the vicinity of the ferry terminal. Could the activity be completely innocent and explainable? Of course. Could the person be engaged in surveillance in preparation for a terrorist attack? Perhaps. Is the behavior suspicious enough to report. Yes.

5. PERSON ASKING UNUSUAL QUESTIONS
While you are working on a customer's boat, a stranger approaches you and strikes up a conversation. She says she is interested in renting dock space for her boat at the marina, and says, "I guess my boat will be pretty secure here since it's very close to the power plant across the bay, and I'm sure the area is heavily patrolled by the Coast Guard and police." She then presses you for more details about the type of land and water patrols, their frequency and their scheduling. The person may be asking legitimate questions, but may also be gathering information for a potential terrorist attack.

6. SUSPICIOUS CONDITIONS -- PHYSICAL BREACHES OF SECURITY
A chain link security fence topped by barbed wire has been erected around the abutments of a bridge you pass by every day. One day you notice that there is a large hole in the fence, large enough to allow a person to climb through. Even though you don't observe either anyone in the area or any object placed inside the fence, you are aware that the hole is large enough for an adult to crawl through.

Several hundred feet down the road, you also notice a car or truck parked in an unusual place -- very close to another security fence at a waterfront shipping facility. The vehicle could be used as a platform for terrorists or criminals to facilitate climbing over the fence to gain access to the secured area.

Both of these are suspicious conditions and physical breaches of security that should be reported, so the fence can be repaired and the vehicle moved.

7. PERSON RENTING A BOAT -- TOTALITY OF CONDUCT
You work at a business that rents small boats by the hour. In the process of renting a boat for the day "to do some fishing," two men ask about the "best fishing spots" on the bay and, pointing in the direction of the Navy base to the North, ask if that might not be a good place to fish. You tell them, "No, the best fishing is in the South Bay area." They fill out the paperwork, and pay you the required deposit and "full day" rate with a credit card. Neither of them seem all that interested in the terms of the contract, nor in the fact that they are not entitled to a partial refund if they return before the end of the day. You then help them load the boat with obviously brand-new fishing equipment and two large coolers, and take the time to remind them, "It might be a good idea to buy some bait." After you check them out on operation of the boat, they leave the dock -- and head North in the direction of the Navy base. The whole situation starts to seem strange to you, including the fact that the person's recently issued drivers license provided as proof of identity, the bank credit card used for payment, and the license plate on their vehicle were from three different states. Individually, each of the oddities in this situation do not rise to the level of "suspicious behavior," but when viewed in their totality they do.