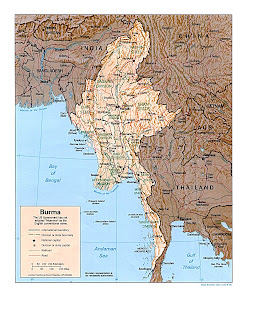 Burma falls under China's sphere of influence, as set out here:

Burma has now become China's most important ally in Asia. China's support for the Burmese junta has recently strengthened immeasurably, as the Chinese leaders have made Rangoon the cornerstone of their revised strategy towards Southeast Asia in the face of what it fears is the growing and unwanted influence of the United States in the region.
***
Some time ago China decided that Burma was crucial to its economic development, especially for the more backward southern regions of the country which have lagged behind the economic development along China's eastern coast. But until recently, China's leaders have feared that Burma's military junta lacked real legitimacy and could collapse overnight, leaving Beijing's military and economic investment in the regime worthless. There is no doubt that China's greatest fear remains Burma's stability. More than a million Chinese farmers, workers and businessmen have crossed into Burma in the last 10 years and are working and living there. The Chinese authorities fear that any upheaval in Burma would result in a mass exodus of Chinese back across the border, creating increased industrial and social unrest in their border regions.

In the past few years Chinese businessmen and provincial government enterprises have boosted their investment in Burma: Lashio, Mandalay and Muse are virtually Chinese cities now. Even in Rangoon, the Chinese are involved in building a special tax-free export zone around the port.

China already has major oil and gas concessions in western Burma, and is planning overland pipelines to bring it to southern China.

Burma is an important strategic transit point for goods produced in southern China. They want to transport these by road to the Rangoon port for shipment to India, the Middle East and eventually Europe. Repair work is under way on Burma's antiquated internal road system that links southern China, through Mandalay to Rangoon.
***
Already along the Burmese border with China, every small town has restaurants and stores run by migrants from China, many have been there for more than a decade. Chinese teachers are also being recruited to work in the Chinese-language and bilingual schools that are popping up in many of the major cities in northern Burma. Already in the major border towns in Shan state like Mongla and Muse, only the Chinese currency _ the renminbi or yuan _ is used; Chinese calligraphy dominates the landscape: billboards, street signs and shopfronts almost all use Chinese characters exclusively; very little Burmese writing can be seen.

In some towns along the border the clocks are set to Beijing standard time rather than Burma's clock to facilitate cross-border contact, according to local Burmese officials.

The Chinese authorities are planning to use Burma as a crucial transit point, not just for the products grown or manufactured in southwest China, but as a means of transporting goods from the country's economic power-houses along the eastern seaboard.

''By shifting the transit route away from the South China Sea and the Malacca Straits to using Burma's port facilities to reach South Asia, the Middle East and Europe they hope to avoid the dangers of crowded shipping lanes and pirates _ the Malacca dilemma as Beijing calls it,'' a senior Chinese analyst told the Bangkok Post on condition of anonymity.