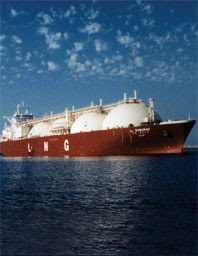 "The waterway itself is more than adequate to navigate" LNG ships 300 metres long, says the study by Marine Safety International, which trains U.S. Navy captains and the bridge crews for many of the world's largest ships.

That conclusion contradicts the government of Canada's stance that allowing LNG tankers in that channel poses an unacceptable navigational risk. Canada's ambassador to Washington, Michael Wilson, cited that reason in February when he told the Americans Canada will use "all legal and diplomatic means" to stop the LNG tankers from entering the passage.

Yet the Canadian official who participated in the five days of simulations, held in Rhode Island last July, did not take issue with the U.S. report's conclusion.

Mihai Balaban, a Transport Canada manager based in Dartmouth, N.S., said he had seen a final version of the report.

Asked if he agreed with the finding that LNG tankers could safely travel through Head Harbour Passage, he replied, "If the report says so, I'm not disagreeing with that."
***
Head Harbour Passage is between the northern tip of Campobello Island and Deer Island in scenic Passamaquoddy Bay. It is in Canadian waters, but is the only sea route to two proposed LNG terminals in Washington County, Me.

Canadian officials have said the government's stance is supported by a consulting firm's study, but the government has never made that study public.
***
Charlotte County environmentalist Janice Harvey, who has taken a leading role in opposing the LNG terminals, said the simulation study may have shown safe passage through the channel is "possible - but it's another thing to say it's prudent."
***
"It was clear that most of the passage to and from the terminal was uneventful, even with equipment failures, as long as the escort tugs were tethered" and the ship kept to the well-timed windows when the tides and winds were right. The study recommended against making the trip in winds of more than 25 knots, or too far on either side of slack tide.

"The main ship channel is deep and wide enough for (LNG ship) engine and steering failures to occur without a major deviation from the intended travel if escort tugs are tethered and used effectively," said the study.

Peacock said he felt the simulation showed a tanker could travel the passage safely in normal conditions even without the help of tugs.

"The reason the tugs are there is in case anything goes wrong," he said.