Fullbore Friday at CDR Salamander featues the cruiser St. Paul (you know you are getting old when you had shipmates who served in her) - but what a fine ship!

And Steeljaw Scribe salutes them that keeps 'em flying at Flightdeck Friday. 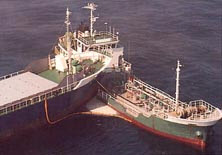 Surface Warfare ship driving, sometimes referred to (by me) as "Death in Slow Motion" has its looonnngg moments, an example of which is described in a post at Chaotic Synaptic Activity. Some of the gray hairs on my head are from waiting for a merchant ship to "do the right thing."
Posted by Mark Tempest at 6/22/2007 10:02:00 AM