In the beginning, there were cruisers and battleships escorted by anti-torpedo boats, which came to be known as "torpedo boat destroyers" - shortened to "destroyers." These were small, fast ships designed to protect larger warships. But as threats increased from torpedo boats to submarines and aircraft, the destroyers evolved, too, becoming larger, better armed. But the underlying principles of their employment remained the same, escort and protect other units. To provide a screen for the the larger warships. To scout ahead of the fleet. Destroyer operations were always closely tied to other fleet units.

Until, that is, the Solomon Island Campaign. Stung by Japanese success in night operations, including the destruction of the American cruiser force at the Battle of Tassafaronga, the Allies sought tactics that could defeat the landing of fresh Japanese troops and supplies. As is often the case in war, leaders rose to meet the challenge. One such leader was Captain Arleigh Burke, who developed the concept of independent destroyer operations:

On 23 October, Capt. Gillan was relieved by Capt. Burke, whose experience in the Solomon Islands (as division commander in DesRon 22 and, briefly, commodore of DesRon 12) and insight (from studying the Battle of Tassafaronga in particular) had led to development of a doctrine of independent destroyer operations first applied by Cmdr. Frederick Moosbrugger at the Battle of Vella Gulf. 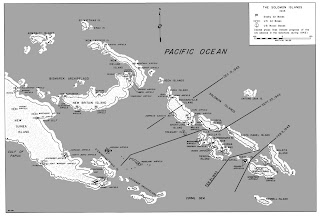 Operating off Bougainville ... the eight ships of the squadron—now known as the “Little Beavers”—themselves put Burke’s doctrine to practice in battle off Bougainville’s Empress Augusta Bay, 1 November.
***
A few weeks later at Thanksgiving, in the waters between Bougainville and New Ireland’s Cape St. George, Ausburne, Claxton, Dyson, Converse and Spence routed five Japanese destroyers, sinking three and damaging a fourth in an “almost perfect surface action.”

Through 23 February 1944, the "Little Beavers" continued operations, prominently at Green Island, Rabaul and Kavieng plus Truk in the Caroline Islands, credited with sinking one cruiser, nine destroyers, one submarine and several smaller ships, and destroying approximately 30 aircraft as well as inflicting much damage via shore bombardment.

The "Little Beavers" also earned the Presidential Unit Citation under Burke's leadership, and their commodore earned the Distinguished Service Medal (DSM) for his "indomitable fighting spirit and great personal courage." DesRon 23 daringly defied Japanese aircraft and closed strongly fortified shores to deliver sustained shellings of Japanese coastal defenses and cover amphibious assaults. Burke later earned the Legion of Merit for his leadership of DesRon 23 in battle off Kavieng, New Ireland, and Duke of York Island on 17 and 23 February 1944. The ships of his squadron destroyed two Japanese auxiliary vessels, one large cargo ship, a minelayer, and four barges in addition to inflicting severe damage on enemy shore installations. DesRon 23 effected a skillful withdrawal without damage.

In October, Burke was... ordered to command DESRON TWENTY THREE. During the next four months the squadron participated in 22 separate engagements and destroyed one Japanese cruiser, nine destroyers, one submarine, several smaller ships and approximately 30 aircraft. Between operations the U.S. surface combatants exercised at night high speed tactics, where, thus far, the Japanese had excelled. Burke was a leader in this effort.

Notable among these actions was the battle of Empress Augusta Bay, Bougainveille, in early November and later that month the Battle of Cape St. George, New Ireland, where Burke led his destroyers in night torpedo attacks on Japanese surface forces. This battle is regarded by many naval historians as the perfect naval engagement. He was awarded the Navy Cross for "extraordinary heroism in operations against an armed enemy" in the Battle of Cape St. George. The ships of the time were capable of 34 knots, but while enroute to a rendezvous prior to that battle, a boiler casualty had limited his group's top speed to 30 knots. When the fleet commander signalled him to make best speed, they mustered an extra knot and he answered "Proceeding at 31 knots" The response, addressed to "31-knot" Burke was a "rib", but captured the imagination of the press and the public and conveyed the image of a dashing, hard-charging combat commander - an accurate description of Arleigh Burke. Early in the new year the decision was made to bypass Rabaul in favor of the Admiralty Islands, 300 miles farther west. DESRON 23 supported landings at Cape Gloucester, in the Green Islands, and participated in the bombardment of Rabaul and its backup base at Kavieng. On the morning of 22 February, Burke's destroyers sank a large Japanese naval tug and rescued 73 survivors. When the captain, who had chosen to fight rather than capitulate, was not among the survivors, Burke ordered a brief prayer service in his honor, an action which gained him great respect in post-war Japan.

Eventually, then Admiral Burke became Chief of Naval Operations. And the squadron he led became one of the most famous of the war, the only destroyer squadron to be awarded the Presidential Unit Citation during WWII. 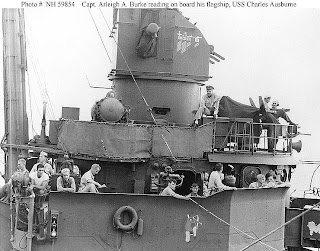 But how did Destroyer Squadron 23 get the nickname "Little Beavers?" That's due to Burke, too:

During the Solomons campaign of 1943 all DESRON 23 ships were extraordinarily busy. Their nights were spent on patrol or bombarding Japanese positions; their days consumed with rearming and refueling. The crews were jokingly referring to themselves as "beavers" because they were so busy. During a squadron inspection by Commodore Burke in December 1943 he noticed that one of the sailors had drawn a picture of a little Indian boy on a torpedo mount, shooting an arrow in Prime Minister Tojo's...fanny. He liked it and decided to adopt it as the squadron logo. It was a picture of Little Beaver, the Native-American "sidekick" of Red Ryder, a popular comic strip character of that time. Little Beaver was heralded for his courage, fidelity and zeal. It was to become very famous as the logo of "The Little Beavers" of Destroyer Squadron 23. Official dispatches frequently referred to them by that nickname. Even today it is a widely known name in Naval circles. Each ship of the squadron has a Little Beaver painted on the side of the bridge.

And now, thanks to Tom Clyce (CLAXTON, WWII), webmaster of the CLAXTON website, we have some of the "rest of the story"...

"Some recent research has found out the name of the CLAXTON sailor that was painting the Little Beaver Logo when Commodore Burke was making his inspection aboard the ship. His name was James Bowler. He was not a torpedoman as was originally thought. We believe he was a seaman from another division and had prewar artist experience. It is not known as yet who had the original idea for the logo, its likely someone in the torpedo gang. Have been in touch with some of them, but no one can remember. Too many years have passed. It is also thought that he painted the logo on the other ships of the squadron later.
Bowler is now deceased." 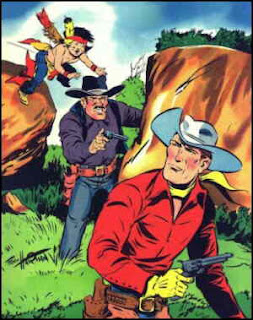 Red Ryder? Information on the comic strip can be found
here. Red Ryder became a successful series of movies after the war as noted here. The actor playing "Little Beaver" acheived fame in other roles. His name - Robert Blake, TV's Baretta and Hollywood murder defendant. 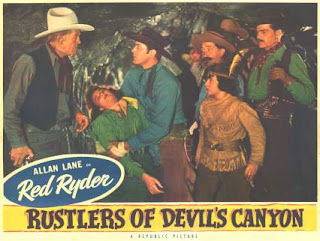 DESRON 23 even had a poem written about it, which follows: 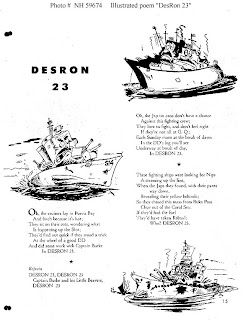