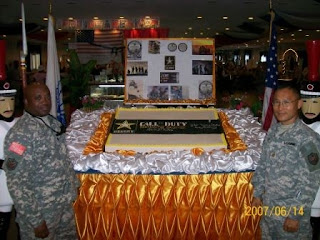 My dad started out in the Army. On horses. My father-in-law was a tanker. So to all of you who served or who have served in the U.S. Army - Happy Birthday!

Official Song of the U.S. Army

Refrain:
Then it's Hi! Hi! Hey!
The Army's on its way.
Count off the cadence loud and strong,
For where e'er we go,
You will always know
That The Army Goes Rolling Along.

Men in rags, men who froze,
Still that Army met its foes,
And the Army went rolling along.
Faith in God, then we're right,
And we'll fight with all our might,
As the Army keeps rolling along.
Refrain: