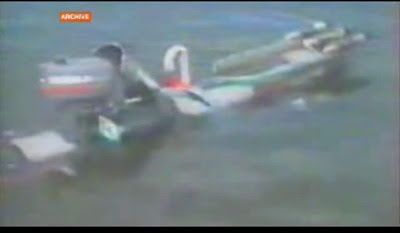 Sri Lanka's navy says it has destroyed five Tamil Tiger vessels after coming under attack from two dozen boats off the island's far northern tip, estimating it had killed dozens of separatist fighters.

Tuesday's clash at sea off Point Pedro in the northern army-held Jaffna peninsula, which is cut off from the rest of the island by separatist-held areas, was the latest in a string of land and sea battles and air strikes in recent months.

A navy spokesman said more than 40 Tigers were "presumed dead".

"We destroyed five boats and damaged seven to eight more.

"They were trying to attack our patrol boats, but they failed," DKP Dassanayake said, adding that no nav

Over the last two days, the navy engaged a fleet of two dozen LTTE boats off the northeast coast. The LTTE were trying to smuggle in people, explosives, weapons and ammunition. Four of the boats were rigged with explosives and manned by crews who planned to ram larger navy gunboats. About a third of the LTTE boats were sunk, and another third damaged. The navy suffered no losses, but most of the boats got away, heading back to India. The LTTE lost about 40 people, plus another thirty in unrelated land combat.

Very interesting video of Sea Tigers versus Sri Lankan Navy, with close ups of Tiger suicide boats ("design based on U.S. stealth bomber?") and a one-man suicide "torpedo" (image above is from video)...the torpedo seems to be guided by a diver operating handle bars and propelled by an outboard motor. The warhead appears to be three mortar rounds (?) at the bow, perhaps tied in with a larger round. The function of the snorkle thing in front of the motor eludes me. The thing is probably easy to stop if you see it coming, but seeing it coming might be a problem. I don't think its a weapon for use in open water, but might be a challenge in ports and restricted waters.

As I have noted before, this is not the first time that suicide boats or suicide submarines have been put to use. The Japanese had both and examples were captured during the capture of Okinawa. 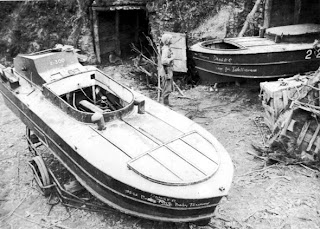 The Kaiten submarine was described as "not so much a ship as an insertion of a human being into a very large torpedo." Suicide boats discussed here.

UPDATE: More on "torpedo" - the simplicity is stunning. 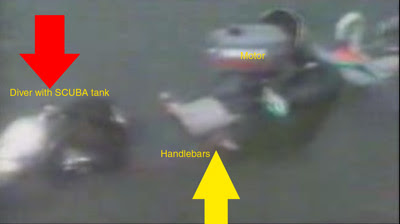